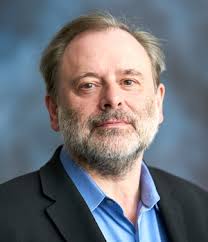 Contact by email
Alan Ashworth, PhD, FRS, is President of the UCSF Helen Diller Family Comprehensive Cancer Center, and Sr. Vice President for Cancer Services with UCSF Health. Prior to joining UCSF in January 2015, he served as Chief Executive of the Institute of Cancer Research (ICR) and the Director of the Breakthrough Breast Cancer Research Centre in London, United Kingdom.
A translational biologist and laboratory researcher, Ashworth's research focuses on understanding breast cancer genetics to improve the treatment and care of patients. He was a key part of the team that identified the BRCA2 breast cancer susceptibility gene that is linked to an increased risk for some types of cancer. Ten years later, he discovered how to kill BRCA1- and 2-related tumor cells by treating them with PARP inhibitors which are drugs that increase the damage caused by the broken DNA repair machinery in those cells. This exemplifies the principle of synthetic lethality as cancer therapy. Three different PARP inhibitors are now approved by the FDA.
In 2016, Ashworth and UCSF's Pamela Munster, MD, established the Center for BRCA Research, one of only two such centers in the US. The mission of the Center is to provide a place for families with BRCA and other mutations to receive personalized care and planning for their long-term health and well-being. He also started the San Francisco Cancer Initiative (SF CAN) that launched in 2016. SF CAN is the first comprehensive cancer plan for a major city and its partners include the City of San Francisco and numerous health and community organizations. Ashworth also chairs the UC Cancer Consortium, an alliance of the five UC cancer centers holding comprehensive cancer center status, the highest designation possible from the National Institutes of Health's National Cancer Institute. The Consortium's projects include precision medicine, clinical trials, population health science, best practices in harnessing big data to improve health, and political engagement for public benefit.
Ashworth is an elected member of EMBO, the Academy of Medical Sciences, and a Fellow of the Royal Society. He has received a number of scientific prizes and awards, including The European Society of Medical Oncology Lifetime Achievement Award, the David T. Workman Memorial Award of the Samuel Waxman Cancer Research Foundation, the Meyenburg Foundation's Cancer Research Award, the Basser Global Prize, the Genetics Society Medal, and the 2017 Brinker Award for Scientific Distinction in Basic Science from the Susan G. Komen Foundation.