Introduction: Late acute rejection (LAR) is defined as an initial episode of acute rejection occurring >6 months after transplantation. Histologically, LAR appears similar to early acute rejection (EAR) and is characterized by mononuclear portal inflammation, venous subendothelial inflammation, and inflammatory bile duct damage. Some studies have suggested that LAR may be associated with inferior graft and patient survival after liver transplantation (LT), but these studies have simultaneously demonstrated that hepatitis C virus (HCV) is also associated with inferior outcomes. In the new era of direct acting antiviral therapy for HCV, the purpose of this study was to examine the impact of LAR on survival in LT recipients without a history of HCV from a single, high-volume United States transplant center.
Materials and Methods: All LT recipients from 2000-2017 were retrospectively reviewed. The following groups were excluded: 1) age<18, 2) history of a liver biopsy with no evidence of rejection, 3) primary diagnosis of HCV, 4) any prior LT. Of the remaining cohort, EAR was classified as a first biopsy that demonstrated acute rejection within 6 months of transplant and LAR was classified as a first biopsy that demonstrated acute rejection >6 months after transplant. Patients who never had a biopsy after LT were included as a control cohort. Descriptive statistics, predictors of LAR, and patient survival were assessed.
Results: A total of 1028 patients were included (no biopsy=676 (66%), EAR=244 (24%), LAR 108 (10%)). There were significant demographic differences among the recipients in the three cohorts, however there were no significant differences in donor characteristics (Table 1). Patients with LAR were significantly younger and had a greater proportion of males compared with EAR. In the multivariable model comparing patients with LAR to those who never required a liver biopsy, recipient age was inversely associated with LAR (OR 0.95, p-value <0.001). Survival was examined from the time of transplant for patients with no rejection, and from the time of rejection for EAR and LAR patients. There was a significant difference in overall survival (Figure 1, p=0.0045); at 10 years, LAR patient survival was 64.6% compared with 72% in the EAR cohort and 79% in the no biopsy cohort.
Discussion: It remains unclear whether LAR represents a pathologic entity that is distinct from EAR. However, this study and others have demonstrated that LAR adversely impacts patient survival. In this analysis, we demonstrate that LAR remains common in patients without a history of HCV and is associated with inferior patient survival outcomes.
Conclusion: The incidence of LAR in patients without a primary diagnosis of HCV was 10%. LAR was associated with an overall increased risk of death when survival was modeled both from the time of transplant and from the time of biopsy. 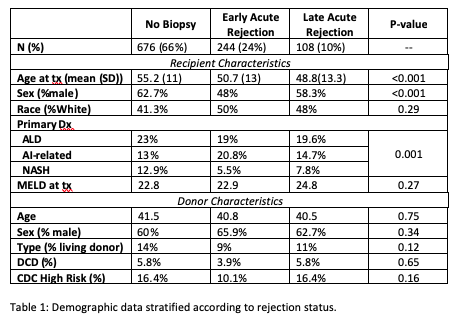