P-16.13 Transplantation of heart-valve and vascular allografts for cardiovascular surgery: Retrospective analysis of the tissue bank registry data for more than 20 years

Transplantation of heart-valve and vascular allografts for cardiovascular surgery: Retrospective analysis of the tissue bank registry data for more than 20 years

Introduction: The University of Tokyo Tissue Bank, one of the only 2 accredited heart-valve and vascular allograft banks in Japan, was established in 1998. For more than 20 years, heart-valve and vascular allografts were recovered from deceased donors, cryopreserved, stored in vapored nitrogen and then used for transplantation. Efficacy of tissue allotransplantation is well known for life-threatening infective/inflammatory cardiovascular disease and congenital heart disease when artificial material is not appropriate, however, the long-term outcome has yet to be determined.
Material and Methods: The University of Tokyo Tissue Bank Registry data collected from December 1998 to the end of 2018 were retrospectively reviewed. Questionaries at the time of transplantation and then at least annually were sent to all recipient hospitals to acquire overall survival and graft survival data. Of all 900 recipients also including hepatobiliary and pancreatic surgery, allotransplantation for cardiovascular surgery was extracted and survival analysis was conducted.
Results: The number of transplantation (for 235 recipients) was 244, using 64 aortic allografts, 104 aortic valve allografts, 73 pulmonary valve allografts, and 10 venous grafts. Aortic replacement numbers 61(including 47 thoracic aortae, 10 abdominal aortae, and 4 thoracoabdominal aortae). Aortic allograft survival at 10 years was 0.71 (95%CI 0.40-0.88). Systemic ventricle outflow was reconstructed for 90 cases including 1 truncal valve reconstruction with a pulmonary valve allograft. Systemic valve graft survival at 10 years was 0.79 (95%CI 0.67-0.88). Reconstruction of Pulmonary ventricle outflow was 45 cases including 20 Ross procedure. Pulmonary valve graft survival at 10 years was 0.88 (95%CI 0.70-0.95). Postoperative In-hospital death rate of aortic replacement was 20 (32.8%), systemic ventricle outflow reconstruction was 15 (16.7%), pulmonary ventricle outflow reconstruction was 7 (15.9%), congenital heart surgery was 18 (21.7%). Preoperative infection and/or inflammation were observed in 168 cases. The in-hospital death rate of this recipient was 43 (25.6%). Recipients overall survival at 10 years for aortic replacement was 0.39 (95%CI 0.26-0.51), for systemic ventricle outflow reconstruction was 0.57 (95%CI 0.44-0.67), for pulmonary ventricle outflow reconstruction was 0.77 (95%CI 0.61-0.87), and for congenital heart surgery was 0.69 (95%CI 0.57-0.78) respectively. 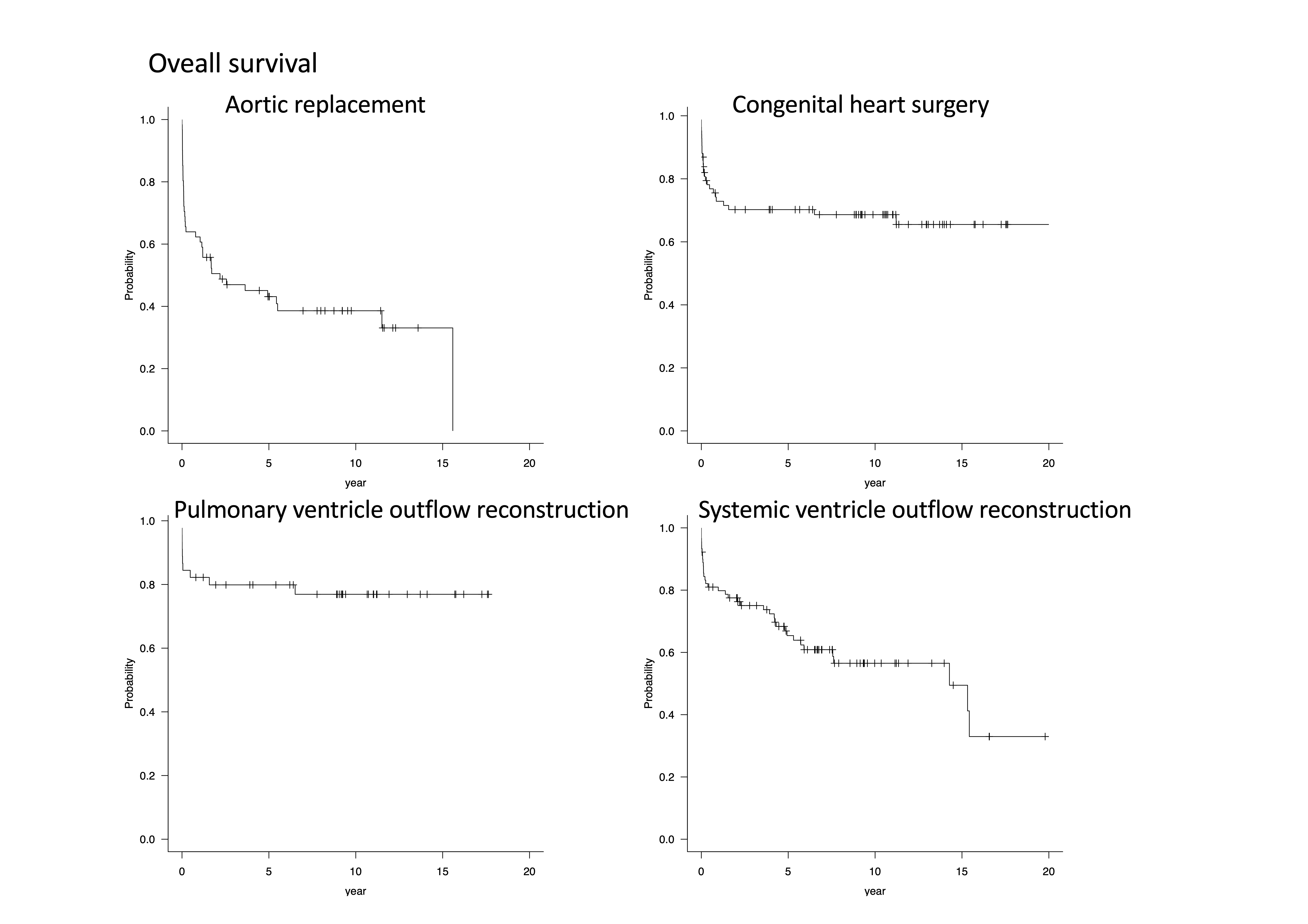