P-18.05 Intensified vs. standard mycophenolate dosing during the first year after kidney transplantation

Intensified vs. standard mycophenolate dosing during the first year after kidney transplantation

Introduction: Optimal long-term mycophenolate dose after kidney transplantation has not been well defined. Early post-transplant intensified mycophenolate mofetil (MMF) dosing in combination with calcineurin inhibitor has been associated with less acute rejection. In a retrospective study we found a negative correlation between MMF dose and progression of interstitial fibrosis during the first year after transplant. The aim of this randomized controlled trial was to prospectively compare the effects of intensified vs. standard MMF dosing on progression of intragraft histologic features during the first year after kidney transplantation.
Materials and Methods: Between May 2013 and April 2015, 77 de-novo non-sensitized kidney transplant recipients from two centers (Zagreb, Croatia and Ljubljana, Slovenia) were randomized to receive intensified dosing of MMF (3g daily, n=39) or standard dosing (2g daily, n=38) during the first year after transplant (NCT01860183). Immunosuppression consisted of basiliximab induction, with tacrolimus, MMF ± steroid maintenance. Protocol biopsies were performed at implantation, and at 12 months and were scored according to the Banff classification. Progression (Δ) of interstitial fibrosis (ci), tubular atrophy (ct), arteriolar hyalinosis (ah), and arteriosclerosis (cv) was calculated from zero and 1-year protocol biopsy scores. MMF dose was calculated as an average monthly dose during the first 12 months. Primary end-point was progression of interstitial fibrosis during first year. Secondary end-points included progression of other histologic scores, graft function, incidence of acute rejection, and graft and patient survival. Follow-up was until Dec 2019. Analysis was by intention to treat.
Results: Baseline demographics, transplant-related characteristics, and histologic scores were balanced between both MMF groups (Table 1). 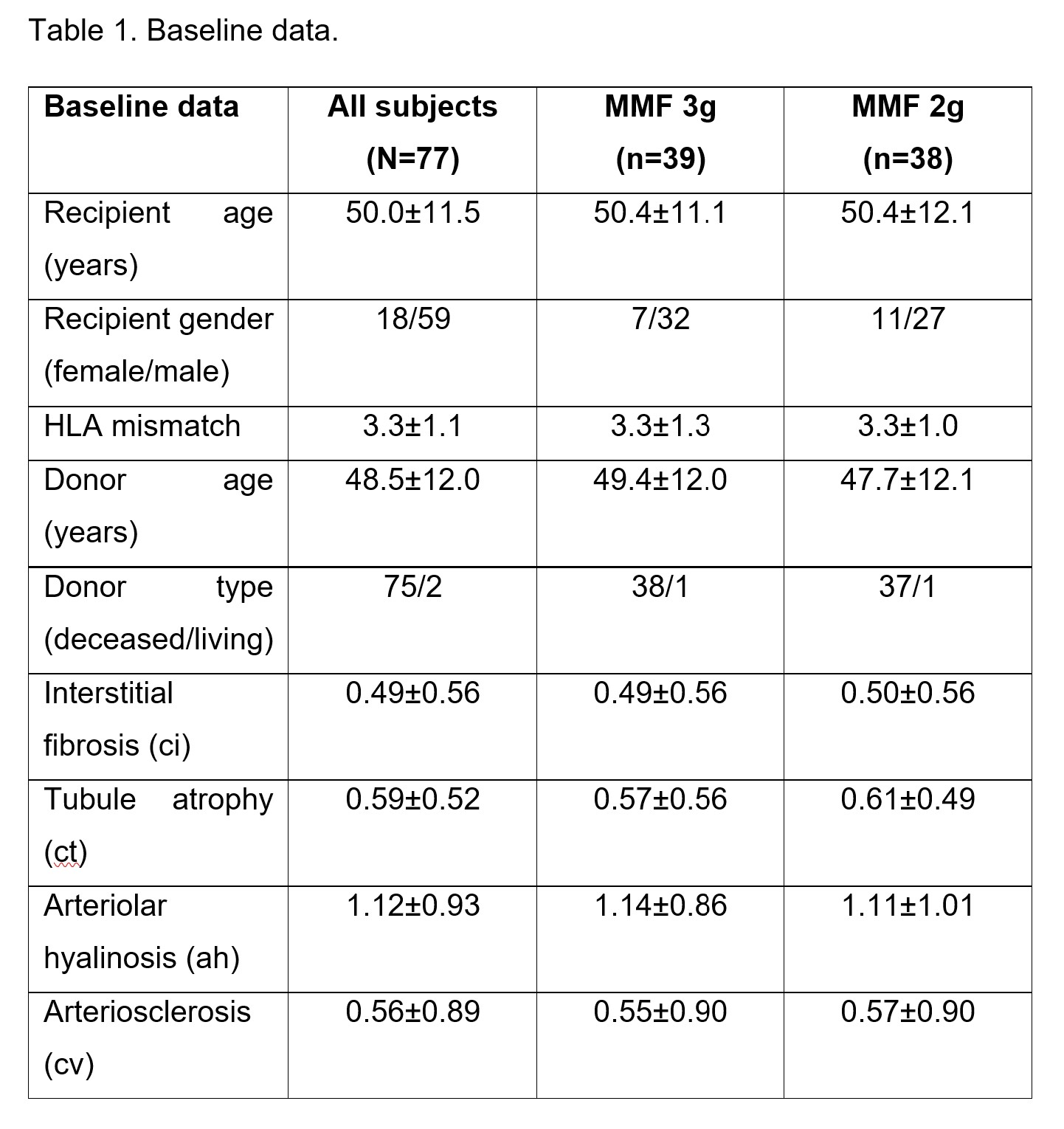 A significant difference between actual MMF dose was maintained in the two MMF arms throughout the first year after transplant (Fig. 1). 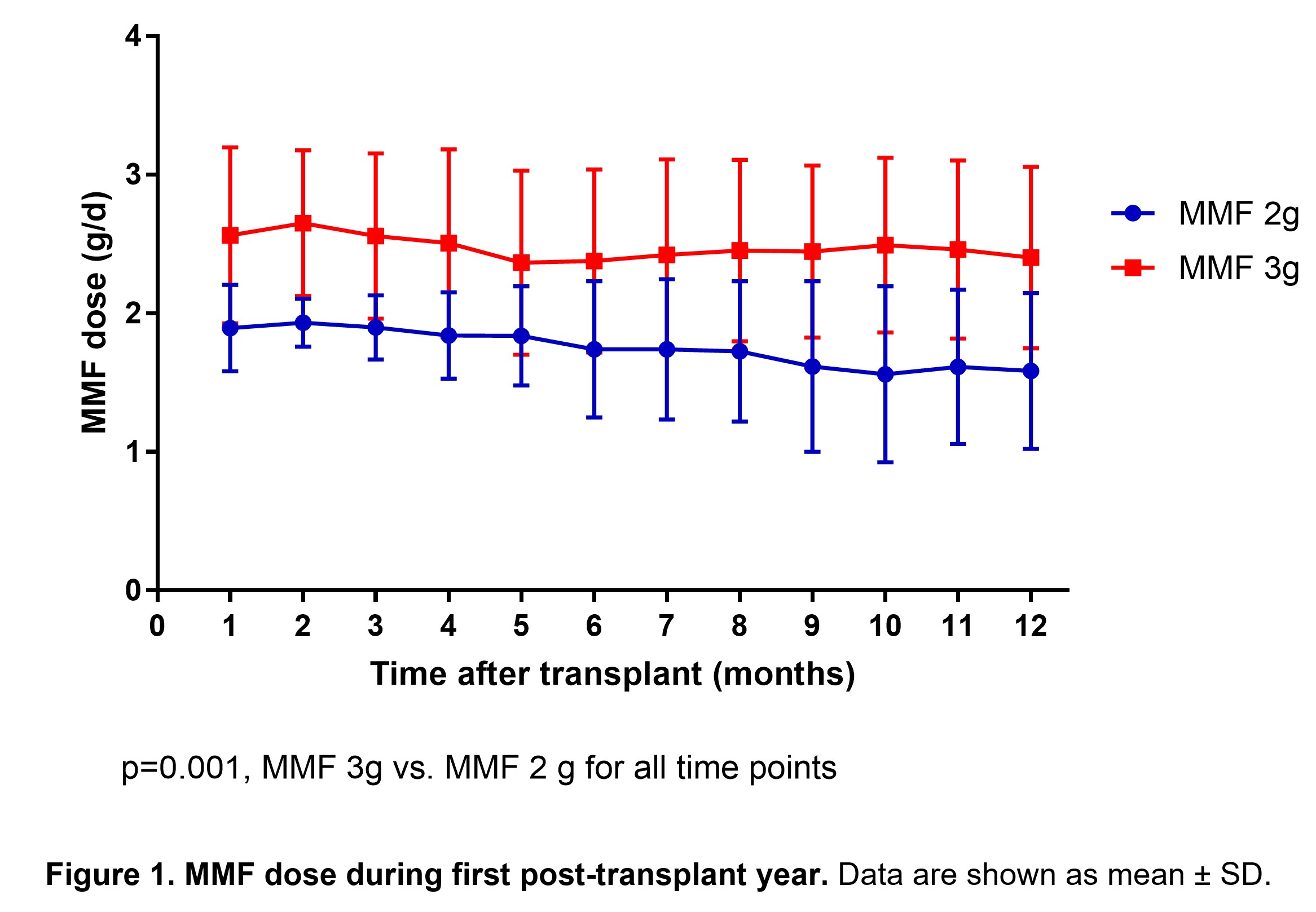 There were no significant differences between tacrolimus levels and steroid doses between the groups. Progression of ci, ct, ah and cv was similar in the two MMF groups (Fig. 2). 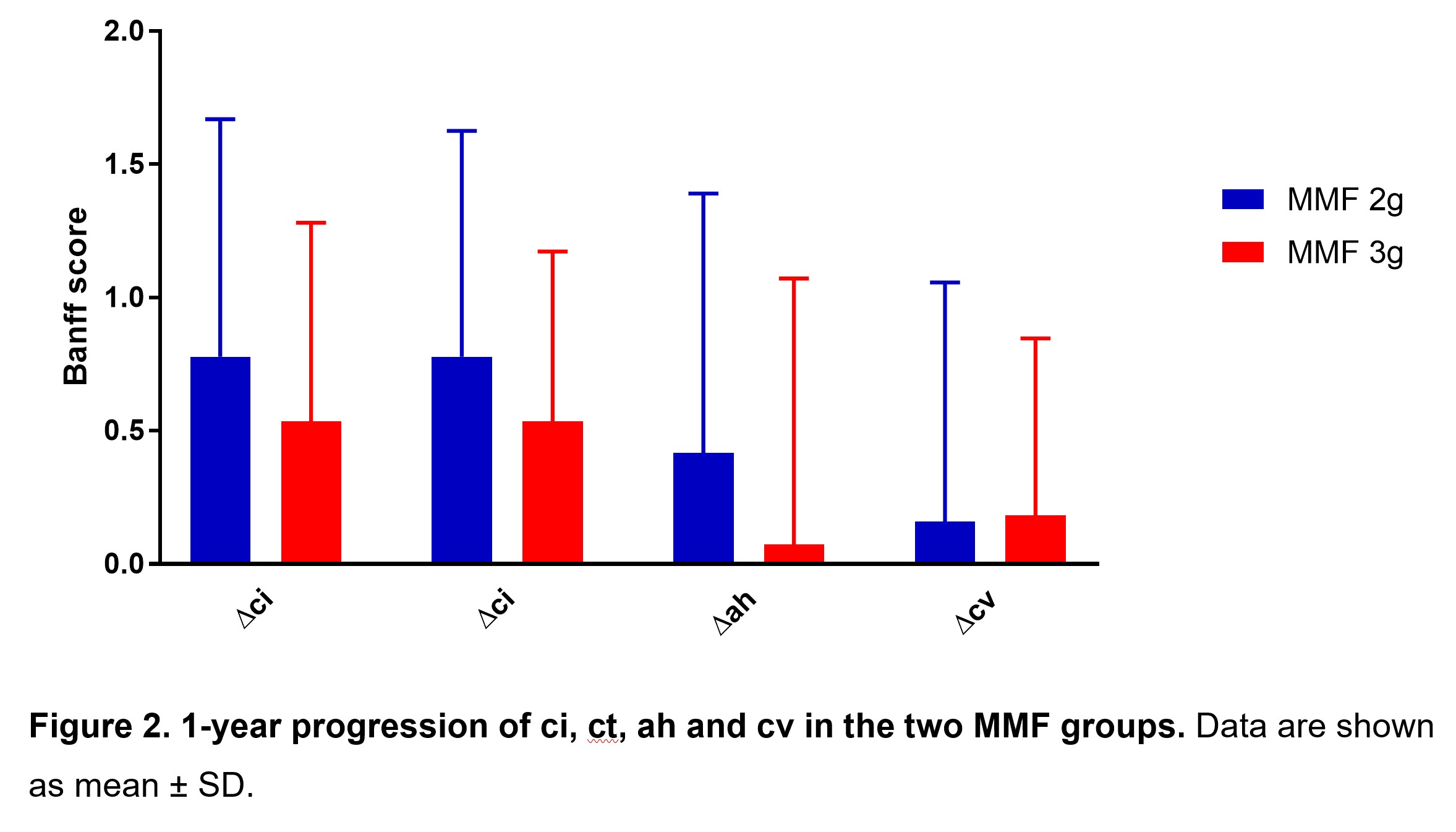 The difference between MMF 3g and 2g treated groups in eGFR trajectories and eGFR at 12 months (61±20 vs. 62±24 ml/min/1.73m2) was not significant (P=0.513). Incidence of rejection within the first year and long-term was lower in the 3g MMF arm, but the difference was not statistically significant (Fig. 3). 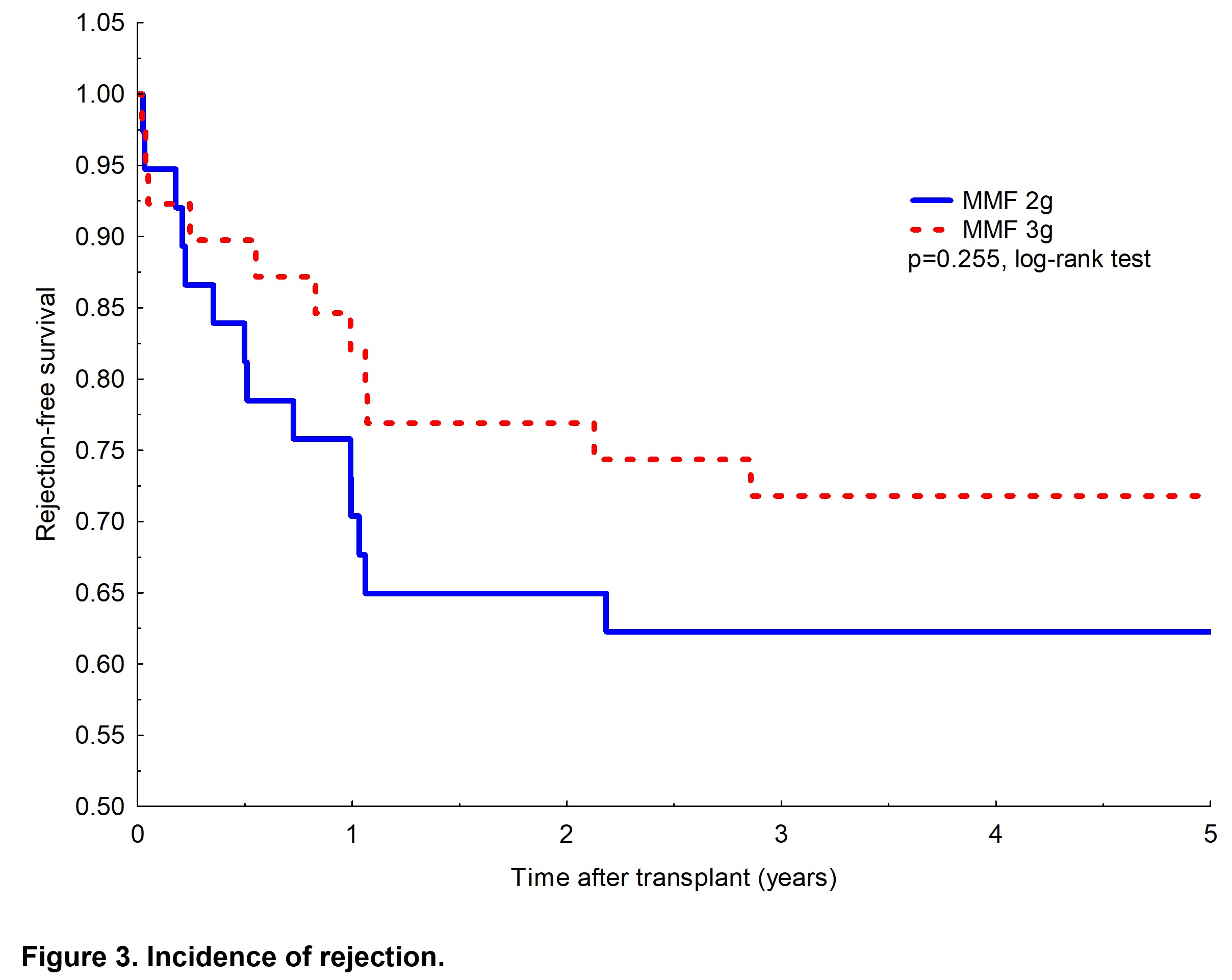 There were no differences in 5-year death-censored graft survival (87% vs 92%) and patient survival (92% vs. 95%; P=0.418) in the MMF 3g vs. 2g group. Incidence of leukopenia that resulted in MMF dose reduction was similar between groups receiving 3g vs. 2g of MMF (20 vs 23%; P=0.588).
Conclusion:  Our trial failed to show that intensified dosing of MMF during the first year after kidney transplantation improves histologic disease features, improves GFR, reduces incidence of rejection, or affects long-term transplant outcomes.