Introduction: Alemtuzumab is used as an induction agent at our centre for higher immunological risk kidney transplants. Aim of this study was to compare the effects of single-dose and two-dose Alemtuzumab on rejection and infection rates.
Methods: Patients receiving Alemtuzumab between 1st April 2015 to 19th November 2018 were included. As per protocol, patients ≤ 60 years received two doses (Group 1) and ≥ 60 years received single-dose (Group 2) Alemtuzumab. The maintenance immunosuppression was similar in both groups (Tacrolimus and Mycophenolate Mofetil). Primary endpoints were biopsy-proven rejection and infection rates (viral (CMV, BK and EBV) and urine infections) at one year. Descriptive statistics and parametric survival analysis (Weilberg distribution) to account for the reducing risk of rejection and infection overtime after transplant.
Results: 231 Renal Transplant recipients received Alemtuzumab with 158 (68.4%) and 73 (31.6%) patients receiving double and single-dose, respectively. The mean age of recipients was 46.6 years (95% CI 45.2-47.9) and 66.9 years (95% CI 64.9-60.1) in Group 1 and 2 respectively. There was no difference in rejection rates between the two groups (Table 1). There was also no difference between the groups either with regards to infection rates (Table 1). 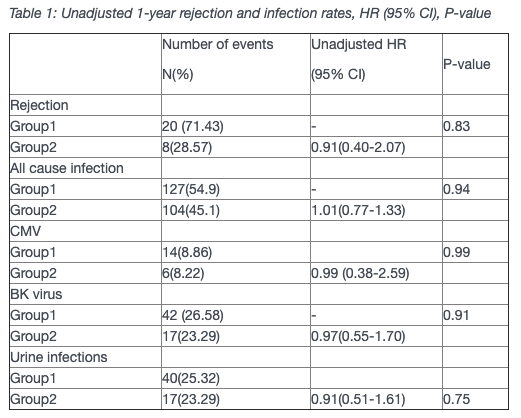 Discussion: RCT comparing  standard basiliximab-based treatment with alemtuzumab-based induction therapy followed by reduced CNI and mycophenolate exposure and steroid avoidance reduced the risk of biopsy-proven acute rejection and infection in alemetuzumab group(1).
However, there are no studies to compare the optimum dose of Alemetuzumab for induction.
Hurst et al. Concluded that in the elderly,  alemtuzumab is associated with an escalating risk of death and graft loss in recipients  of kidney transplantations (2).Considering the reduced immunity in  elderly patients, high risk recipients (age>60years) receive single doseas a protocol at our centre.
Our present study comparing single dose versus double dose Alemetuzumab showed similar biopsy proven rejection and infection among the groups.
Conclusion: For patients requiring Alemtuzumab induction, due consideration should be given to switching to single-dose as the rejection and infection rates are comparable.