282.2 The risk of post-KT outcomes by induction choice differ between older and younger KT recipients

Introduction:  Among adult kidney transplant (KT) recipients the risk of post-KT outcomes differs by choice of induction immunosuppression. Older recipients experience a compromised immune response; yet, choice of induction is not tailored by recipient age likely due to a lack of evidence about the association between induction and outcomes like length of stay, acute rejection, death-censored graft failure (DCGF), and mortality among older recipients. Therefore, we compared the risk of these post-KT outcomes by induction (rabbit anti-thymocyte globulin [rATG] versus basiliximab) and tested whether these associations differed between older (≥65 years) and younger (<65 years) KT recipients.
Materials and Methods: Using the Scientific Registry of Transplant Recipient data, we identified 46075 KT recipients (age ≥18) in the United States (1/1/2010-12/31/2016) who  received  maintenance immunosuppression of tacrolimus, mycophenolate mofetil and steroid  at the time of discharge. We  estimated  adjusted  odds ratio (OR) of 1-year acute rejection (AR)  and  hazard ratios (HR)  of DCGF and mortality  by using logistic and Cox regression.  Relative time to discharge  was  tested with accelerated failure time model.  Then, we tested whether the association between induction and post-KT outcomes differed between older and younger recipients (effect measure modification) using a Wald test.  Missing covariates were imputed using chained equations. All models  were weighted  by propensity score to  adjust for  confounders.
Results: Of the  46075  recipients,  74.9%  received  rATG  and  25.1%  received  basiliximab. 66.2% of 9949 older recipients and 77.3% of 36125 younger recipients received rATG. rATG was associated with a decreased risk of AR, death, and discharge but not DCGF; however, the associations between induction choice and AR (interaction p=0.031), death (interaction p=0.006), and time to discharge (interaction p=0.012) differed by recipient age. Compared with  basiliximab, rATG  was more strongly associated with a decreased risk of AR  among older (OR=0.71, 95% CI:0.61-0.84) than among younger recipients (OR=0.87, 95% CI:0.80-0.96). However, there was no association between rATG and mortality among older recipients (HR=1.02, 95% CI:0.94-1.12) but among younger recipients (HR=0.87, 95% CI:0.80-0.94). Finally, rATG was only associated with time-to-discharge among younger recipients (HR=0.88, 95% CI:0.81-0.97) but not among older recipients (HR=1.02, 95% CI:0.96-1.08). 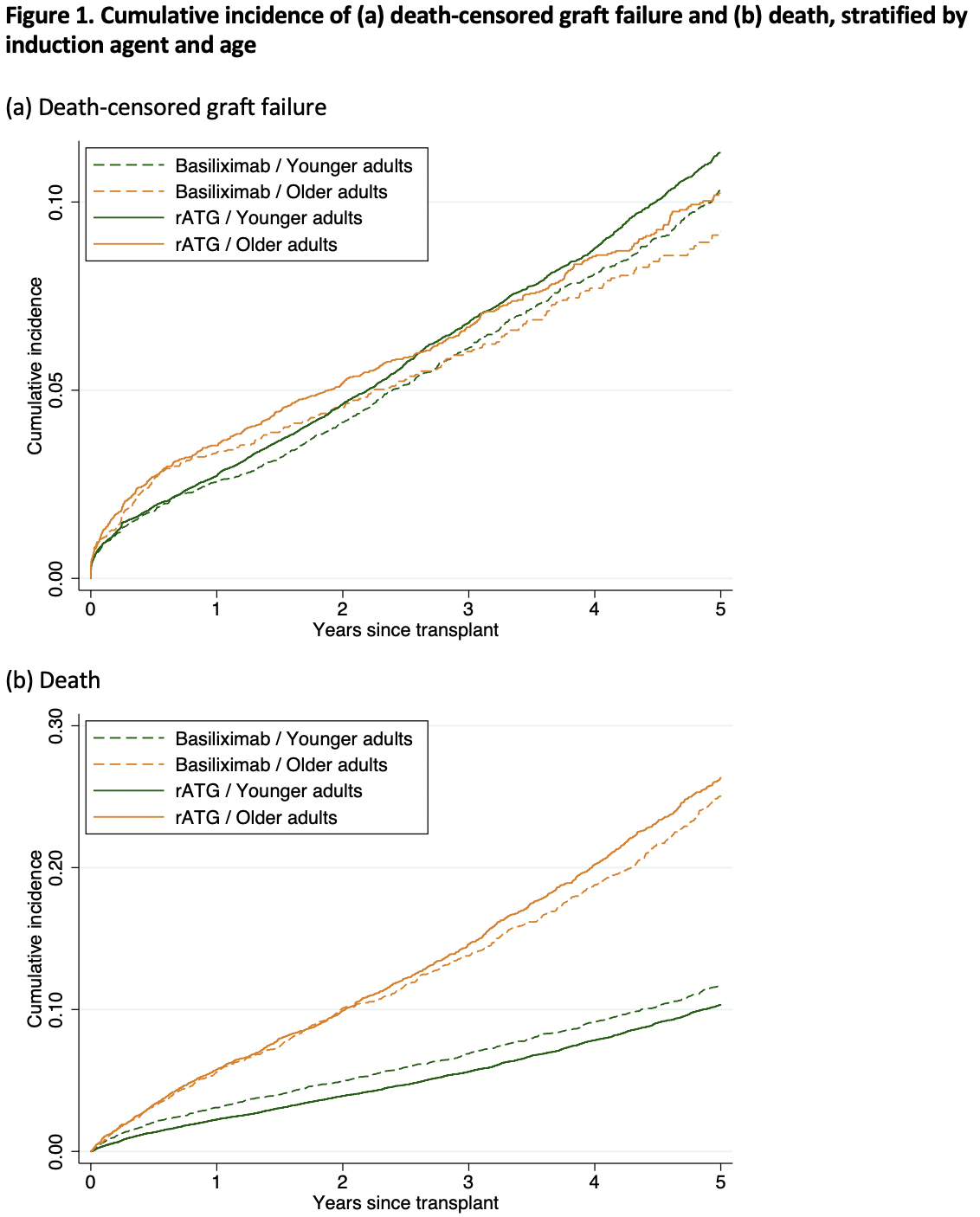 Conclusions: Our findings suggested that rATG  may  reduce the risk of AR compared to  basiliximab more strongly among older KT recipients than among younger KT recipients. Among older recipients, there was no significant evidence of the association between rATG and mortality or length of stay compared with basiliximab. Choice of  induction  immunosuppression  should be tailored by recipient age to reduce the risk of AR in older recipients.