213.2 A novel pre-vascularized tissue engineering chamber serves as a bio-artificial pancreas for an attractive site of allogenic and xenogeneic islet transplantation

Ask a question
University Of Electronic Science And Technology Of China

Background: Although the sites for clinical or experimental islet transplantation have been well established, the pancreatic islet survival and function in homing locations still remain unsatisfied[1]. One of possible reasons that account for this is local hypoxia due to the shortage of blood supply[2]. Here we modified a pre-vascularized tissue engineering chamber (TEC) in vivo which facilitated the vitality and function of seeded islets by providing a microvascular network prior to transplantation.
Method: A TEC filled with MatrigelTM and bFGF-2 was created and embedded in the groin of streptozotocin-induced diabetic mice. The micro-vascularization in the TEC was analyzed by histology, real-time PCR and western blotting. Three hundreds of syngeneic islets were seeded into the chamber on day 0, 14, and 28 post-chamber implantation to research the degree of pre-vascularized in the TEC. In addition, different numbers of syngenic islets (300, 200, and 100) were seeded into the chamber on day 28 post implantation to study the TEC function influenced by islets quantities. Furthermore, we explore the feasibility of TEC as a transplantation site for islet allograft and xenograft which was treated by anti-CD45RB and/or anti-CD40L (MR-1).
Results and Discussion: A highly developed micro-vascularized network was established in the TEC on day 28 post implantation. The normalization of blood glucose levels of diabetic mice was negatively correlated with the time required for pre-vascularization and the number of seeded syngenic islets. The combined treatment of anti-CD45RB and MR-1 guaranteed the grafts long-term survival after allotransplantation (5/5, 100%) and xenotransplantation (16/20, 80%). Flow cytometry showed the frequency of CD4+Foxp3 Tregs and CD4+IL-4+Th2 cells significantly increased in tolegenic xenograft transplantation, compared with the decrease of CD4+IFN-γTh1 cells.
Conclusion: These findings highlight that the highly developed micro-vascularized construct facilitates islet transplantation in the TEC, implicating the possibility of application as an artificial pancreas in the future. 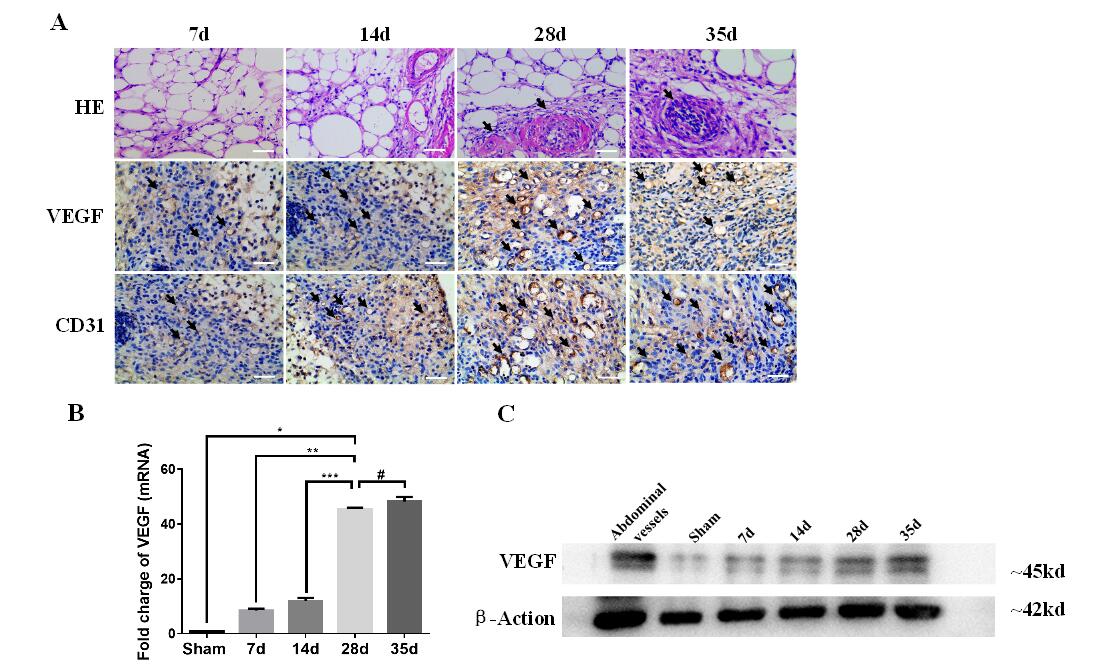 Fig.1 (A) HE images (1st row; scale bars: 10 μm) and histology analysis (2nd and 3rd rows; scale bars: 40 μm) of pre-vascularization TECs on day 7, 14, 28 and 35. Blood vessels were marked by black arrows in HE (1st row; scale bars: 10 μm). The micro-vascularize were stained by anti-VEGF and anti-CD31, and marked by brown and black arrows seperately (2nd and 3rd rows; scale bars: 40 μm). (B)The level of VEGF mRNA was quantified. The extent of pre-vascularization confirmed a significant increase in the 28d group compared with VEGF levels in the 7d and 14d groups (p**<0.001, p***<0.001), and no significant difference between the 28d group and the 35day group (p#>0.05). Sham of inguinal adipose tissue set as control. Data was shown as the mean ± SD and representative of three separate experiments. (C) Western blot analysis showed the protein levels of VEGF at different time points in TEC. 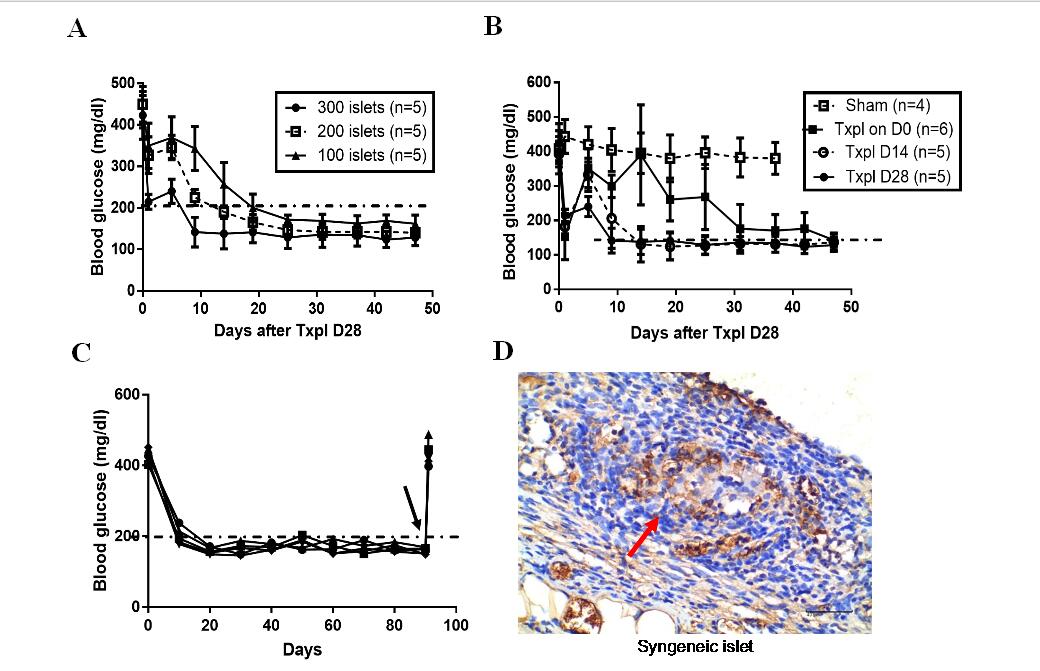 Fig.2 The time required for the blood glucose returning to normal level (11.1mol/dl) in diabetic mice was negatively correlated with the pre-vascularization time (A) and the seeding quantity of syngeneic islets (B). (C) Non-fasting blood glucose maintained normoglycemia after syngeneic islets transplanted in the TEC of diabetic mice, and became hyperglycaemia when the TEC removed (black arrow). (D) Insulin stained donor islet in recipient TEC at 90d posttransplant (shown brown), the islet was pointed by the red arrow (Scale bars:40 μm).Txpl: Transplantation post-implantation 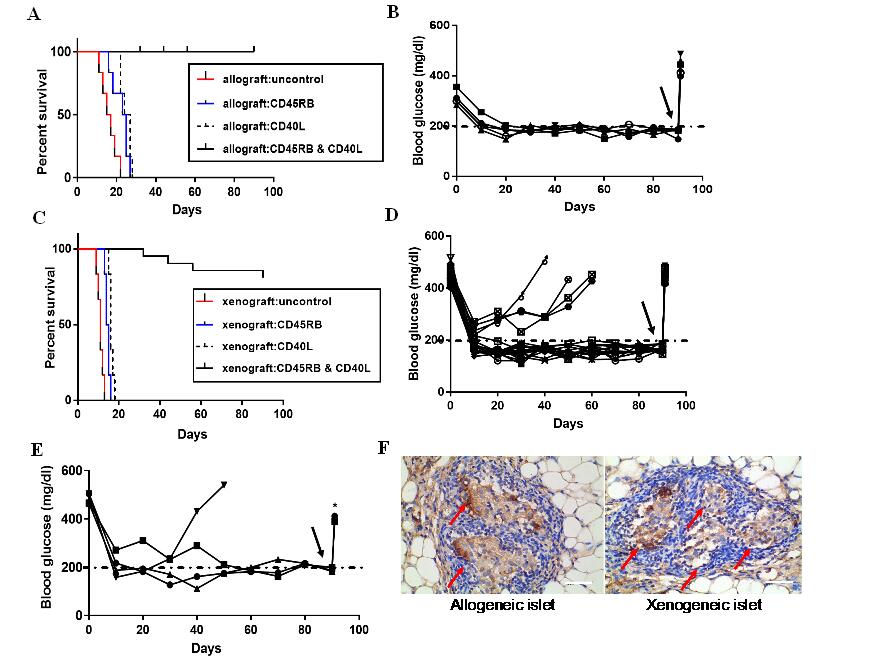