P-2.22 Use of dd-cfDNA as a surrogate marker of injury following hypothermic machine perfusion

Background: Hypothermic machine perfusion (HMP) preservation is thought to convey benefits through reduction of resistance, improved renal perfusion and better support for allograft tissue with the preservation fluid. The evidence around HMP use to improve delayed graft function (DGF) and allograft survival remains mixed. Donor-Derived Cell-Free DNA (dd-cfDNA) as a marker of allograft injury has been shown to be an effective tool for risk stratifying patients with active allograft injury who may be having allograft rejection or allograft injury from other insults.
The aim of this study was to use dd-cfDNA to assess post-transplant injury in kidneys that had undergone HMP compared to those that were preserved with static cold storage (SCS) prior to transplant and determine if HMP is beneficial in reducing early post-transplant injury.
Methods: 152 donation after cardiac death (DCD) kidneys were transplanted following SCS and 27 after HMP using the LifePort and RM3 devices. dd-cfDNA levels were obtained about 30 days post-transplant (dpt) (SCS median dpt 22, IQR:[19, 27] and HMP median dpt 28, IQR: [26, 29]). dd-cfDNA levels were compared between the two groups.
Results: The median cold ischemia time (CIT) for SCS kidneys was 13.3 hours (IQR: [6.5, 18.3]) compared to 9.3 hours (IQR: [2.2, 21.7]) for HMP (p = 0.7366; Wilcoxon two-sample test). At 30 days, the median dd-cfDNA in the SCS group was 0.42% (IQR: [0.27%, 0.70%]) while HMP group was 0.36% (IQR: [0.28%, 0.68%]); no significant difference between the two groups, p = 0.7732 (Wilcoxon two-sample test). There was also no difference in the incidence of DGF or lactate level p = 0.68. 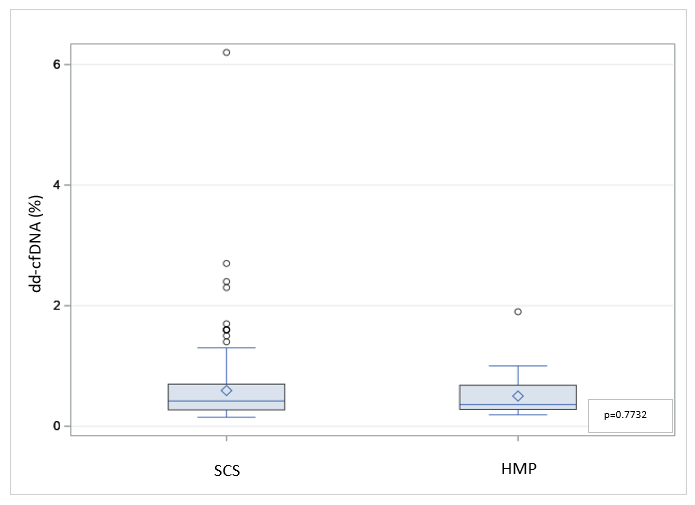 Conclusion: Preservation injury quantified by dd-cfDNA after transplantation was not significantly different between SCS and HMP, possibly due to the relatively short CITs, with the likelihood they would be different in cases with more prolonged CIT. Larger, more comprehensive trials assessing dd-cfDNA as a surrogate endpoint for perfusion injury should be considered.