Ask a question
University of Adelaide

Introduction: A regulatory role has been ascribed to subsets of B cells in mice and humans with the capacity to secrete the immunomodulatory cytokine IL-10, which potently suppresses pro-inflammatory CD4+ T cell activation. In mice, systemically inducing B cells to secrete IL-10 leads to transplant tolerance, and in humans, IL-10 production within the functionally immature ‘transitional’ B cell subset is predictive of long-term outcomes in kidney transplantation. However, IL-10 also stimulates B cells to secrete antibody. To address this disparity in function, we tested the hypothesis that IL-10 is regulated differently in different B cell subsets. Instead, we found that IL-10 secretion is decisively regulated by microenvironment-specific cytokines, and is therefore context rather than subset dependent.
Materials and Methods: Transitional, naïve and memory B cell subsets were sorted from human peripheral blood based on expression of the developmental markers CD24 and CD38. Cells were stimulated with 20 known immunomodulatory factors, and IL-10 secretion measured by ELISA and ELISpot. The same factors were then assessed for their effect on IL-10 secretion induced by CD40L and unmethylated CpGB DNA. IL-4 was further investigated as a regulator of the B cell IL-10 response by cytokine bead array, intracellular flow cytometry, and using a B cell-derived NF-kB reporter cell line. The effect of B cell-derived IL-10 on antibody secretion and class-switching was measured by bead array.
Results and Discussion: Contrary to our hypothesis, transitional, naïve and memory B cells secreted IL-10 in response to the same stimuli, with IFNα/β, CpGB, CD40L and B cell receptor stimulation inducing the greatest responses. Eight factors were identified as putative regulators of IL-10 secretion in response to CpGB and CD40L. Amongst these, the Th2/Tfh helper cytokine IL-4 decreased IL-10 concentrations in supernatants by >80% (p<0.05), without affecting secretion of the pro-inflammatory cytokines IL-6 and TNFα. IL-4 did not impair NF-kB signaling, expression of activation markers CD80, CD86, CD69 and CD40, nor production of the IL-10 protein, suggesting selective inhibition of the IL-10 secretory process. In the absence of IL-4, B cell intrinsic IL-10 was found to be important for the rapid polyclonal induction of complement-activating antibody classes.
Conclusion: Recent interest into IL-10 secreting B cells has raised the question of how IL-10 secretion is regulated when it is not confined to a specialised B cell subset. Here we describe a mechanism for the regulation of IL-10 secretion by B cells and propose a context dependent model to address these question, wherein the capacity of a cell to secrete IL-10 is regulated by its localisation. Our data suggest that IL-10 secretion would be suppressed within IL-4 enriched environments such as the germinal centre, and that relieving this inhibition may be required for suppression of T cell immunity. 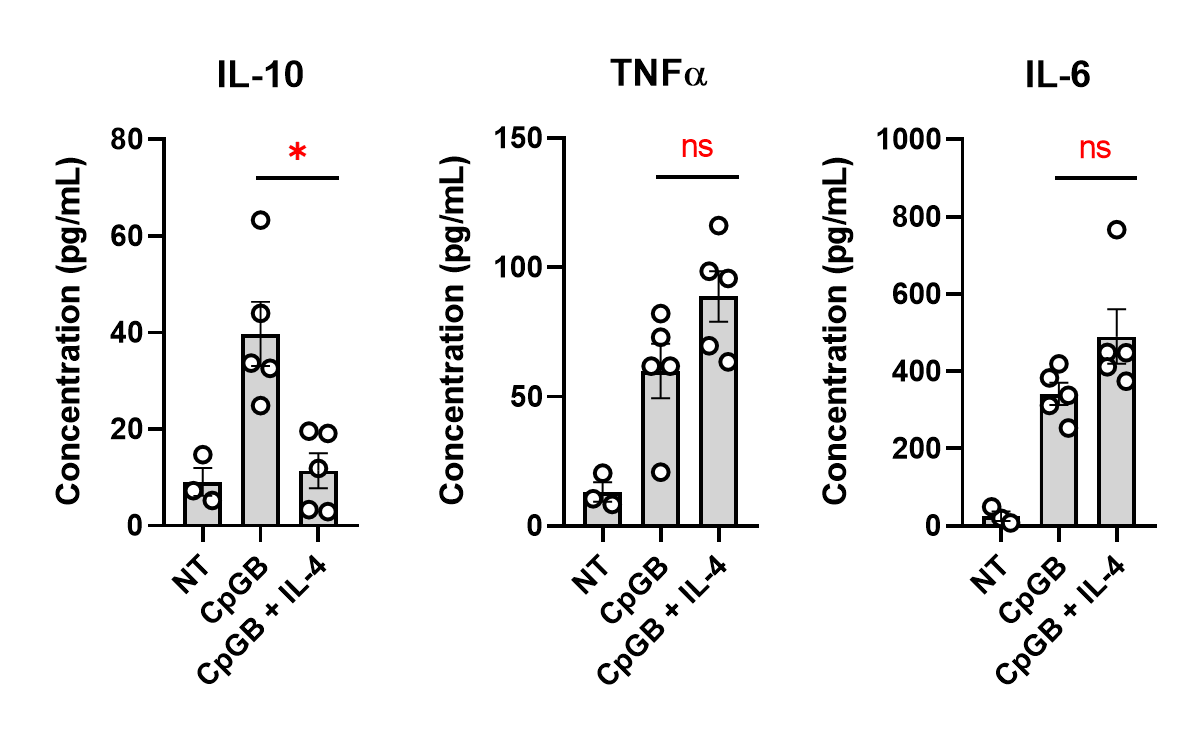