P-2.60 Experimental evidence on the role of the spleen in graft versus host disease after visceral transplantation

Introduction: Graft versus host disease (GVHD) is one of the most severe complications after visceral transplantation (VT); its incidence in various series ranges from 5% to 20%, and mortality is disappointingly high, ranging from 40% to 70%. Native spleen removal has been common practice in patients undergoing MVTx. For some years, the donor spleen was included in the graft, in an attempt to compensate for the resulting asplenic state. Nowadays, different criteria are used in surgical practice regarding recipient splenectomy during visceral transplantation. We aimed to assess native spleen preservation role in an experimental model of graft-versus-host-disease (GVHD) after allogeneic modified multivisceral transplantation (MMVTx).
Material and Methods: Allogeneic Heterotopic MMVTx (Lew to BN) that reproduces GVHD signs was performed. Rats recipients were divided in two groups, native spleen preservation (+SP) and native spleen removal (-S). GVHD clinical and histopathological incidence was evaluated. Also, in order to determine the effect of native spleen preservation, CellTrace Violet-stained LEW PBMCs were injected in a non-transplanted BN rat and performed a partial splenectomy and then a full splenectomy (24 and 48 h post-cell injection, respectively).
Results: Incidence of clinical and histological signs of GVHD after experimental MMVTx is reduced by recipient spleen preservation. Macroscopic skin GVHD manifestations were significantly more frequent in the MMVTx-S recipients compared with the MMVTx+SP group (p<.05). The histological analysis showed significant differences in the GVHD skin scale used between the MMVTx-S and MMVTx+SP groups.
As shown in Figure A and B, LEW CellTrace Violet-stained CD3+cells were detected in the bloodstream 2 h after PBMC injection, with a clear decrease in their frequency 48 h later. In a consistent manner, the percentage of CellTrace Violet+ BN MHC I- T-cells in the spleen was significantly lower 48 h after PBMC injection compared with 24 h (Fig. C and D, p<.05), indicating clearance of LEW cells from both blood and spleen. However, as depicted in Figures E and F, no differences in the percentage of CD3+Annexin+ cells between LEW and BN lymphocytes were observed at 24 h (Lewis: 3.7% ± 0.3% and BN: 4% ± 0.4%) or 48 h (LEW: 3.2% ± 0.5% and BN: 4.1% ± 0.7%). Considering that LEW PBMCs had absorbed CellTrace Violet dye, we hypothesized that macrophages would become positive for this fluorochrome if they engulfed them. As shown in Figures G and4H, 12.5% ± 1.9% of BN macrophages become CellTrace Violet-positive 24 h after PBMC injection and 23.5% ± 2.1% after 48 h. 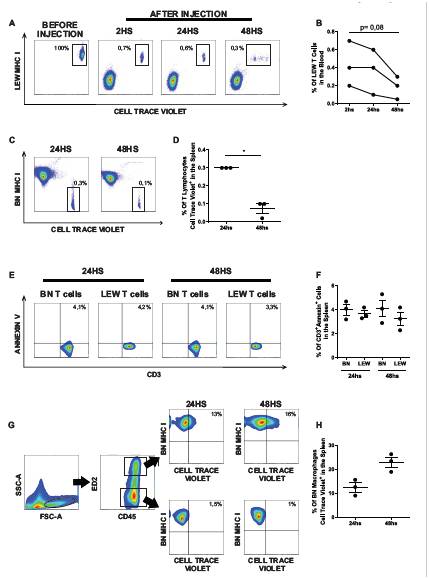 Conclusion: Spleen preservation attenuates clinical signs of GVHD after MMVTx. Spleen marophages ability to internalize allogenic cells could explain the lower frequency of donor T-cells in the spleen preservation group versus the splenectomized animals. All these data suggest a possible mechanism that links spleen preservation during VT and lower GVHD incidence.