Aim: To study the effect of kidney transplantation on gut microbial communities, and investigate the role of dietary fibre in modulating host microbiota to improve graft survival in a murine model of kidney transplant rejection.
Methods: Kidney transplants were performed from BALB/c(H2d) to B6(H2b) or B6(H2b):GPR43-/- mice as allografts, and to BALB/c(H2d) as isografts. Allograft mice received normal chow (WT+NC), a HF diet (WT+HF), or sodium acetate (SA) supplementation (WT+SA; GPR43-/-+SA). Isografts were fed NC only. Gut microbiota composition was assessed by 16S rRNA sequencing prior, at post-transplant day 14, and at post-transplant day 100.
Results: In mice fed NC allograft transplantation resulted in a significant shift in gut microbial composition at day 14 post-transplant, which was not evident in isografts (Fig. 1 & 2). 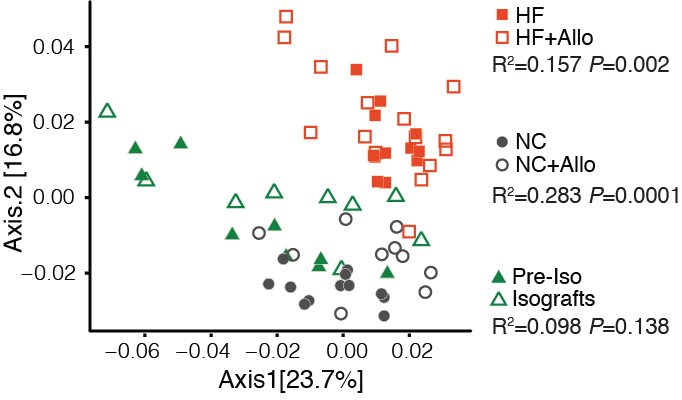 Conclusions: Kidney transplantation resulted in enduring changes to the gut microbial landscape that were not evident in isografts, suggesting the host-donor immune response as the primary driver of transplant-induced dysbiosis. HF diet prevented transplant-associated dysbiosis and afforded protection against allograft rejection. Protection was mediated, at least in part, by SCFAs and was dependent on a CD4+CD25+Foxp3+ regulatory mechanism and signalling via GPR43. Dietary manipulation of the microbiome warrants evaluation in human transplantation.