Background: Regulatory T cells (Tregs) are powerful modulators of immune function and are of increasing interest as an adoptive cellular therapy for the treatment of transplant rejection. The principal strategy in clinical use is the ex vivo-expansion of Tregs from the transplant recipient followed by infusion post-transplantation. This method aims to alter the in vivo balance of T effector cells to Tregs, thus promoting a pro-tolerogenic state. An in depth understanding of the peripheral lymphocyte phenotypic changes in transplant recipients after administration of Treg cellular therapy may facilitate the detection of relevant biomarkers. In this study, mass cytometry (CyTOF) was used to investigate the phenotypic and functional changes in peripheral Tregs after cellular therapy.
Methods: 6 renal transplant patients received a single dose of up to 10x106/kg polyclonally-expanded autologous Tregs shortly after transplantation, followed by standard maintenance immunosuppression. Peripheral blood mononuclear cells (PBMCs) were collected from patients before transplantation, 2 weeks and 60 weeks post-transplantation. CD4+ cells were isolated from PBMCs and multiplexed for processing by CyTOF. The phenotype and composition of peripheral Tregs was examined using a dedicated 36 antigen panel.
Results: Tregs identified by expression of FOXP3 clustered together into a distinct CD4+ population. Distinctive clustering patterns were observed across a number of Treg-relevant markers, which were associated with specific alterations post-transplantation. Changes were observed in both the frequency and composition of the Treg compartment between the pre-transplantation and post-transplantation time-points, with significant changes in the frequency of homing markers CLA+ and CCR7+ Tregs. Heatmap analysis demonstrates high enrichment of key functional markers including FOXP3, Helios and CD27. High expression of Treg co-inhibitory molecules including PD-1, CTLA-4, CD39 and TIGIT correspond with the expression of CCR4. 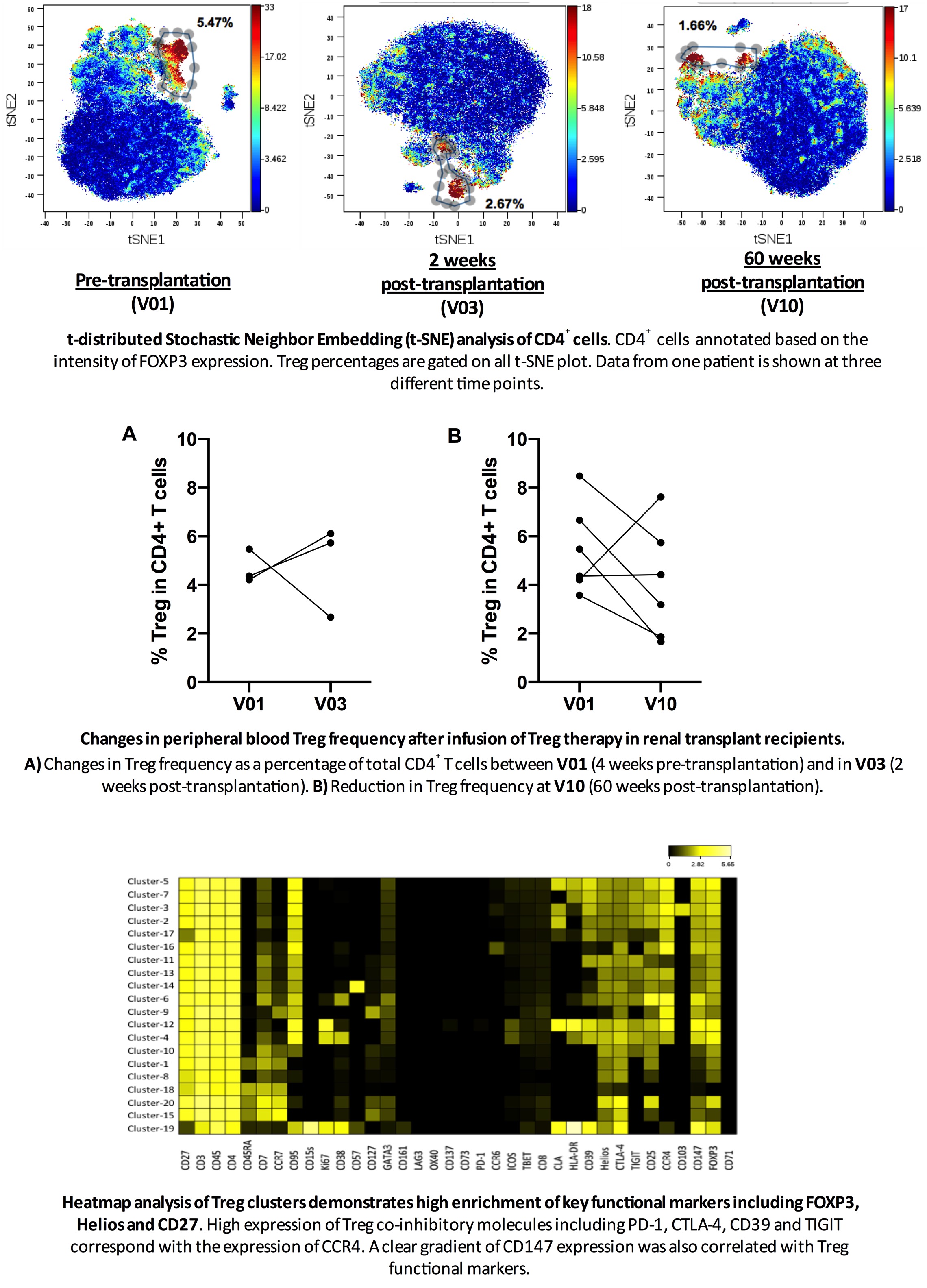 Conclusion: Multidimensional analysis using CyTOF is a powerful technique for the in-depth examination of peripheral lymphocytes in patients receiving advanced cellular therapies. In the current study, the ability to evaluate multiple antigens concomitantly allows for unbiased detection of specific clusters of Tregs. Appreciating how these clusters behave after treatment with a cellular therapy offers an insight into the phenotype of a tolerogenic state, which in turn may assist in determining the optimal time for immunosuppression minimisation.

This work was funded by King Abdul-Aziz University, Saudi Arabia.