Introduction: Induced pluripotent stem cells (iPS) have a wide source and is not restricted by ethics, so that it is expected to become a new source of immature dendritic cells (imDCs). The Chinese medicine monomer sinomenine (SN) can reduce the expression of co-stimulatory molecules on the surface of imDCs, thereby inhibiting the maturation of imDCs. Therefore, in this study, we intend to explore the process of SN acting on induced pluripotent stem (iPS) to differentiate into imDCs, and in order to obtain imDCs (SN-iPS-imDCs) that can remain immature for a long time.
Methods: IPS cells were differentiated into imDCs (SN-iPS-imDCs and iPS-imDCs) with three-steps differentiation method with SN. A mouse skin transplantation model was established; SN-iPS-imDCs (1×106 cells) were infused into the mouse skin transplantation model, and 5 groups of controls were established; the skin rejection score, graft survival rate and body weight were observed in recipient mouse; the serum levels of cytokines, the proportion of lymphocyte subsets CD4+CD25+Foxp3+Tregs in the spleen, and the relative expression of Foxp3 mRNA were detected in the recipient mouse; unrelated third-party lymphocytes were added to the lymphocyte mixed culture, and the specificity of induced transplant immunoreactivity by SN-iPS-imDCs and iPS-imDCs were observed; the tissue destruction and inflammatory cell infiltration in the skin graft were detected by histopathology.
Results: A mouse skin transplantation model was successfully established. The scores of skin rejection in the SN-iPS-imDCs group were significantly lower than those in the PBS, SN and iPS-imDCs groups at each time point after surgery; on day 28 of transplantation, the body weight of the SN-iPS-imDCs group was increased significantly compared with day 0 (P<0.05); survival analysis showed that the survival time of skin grafts in the SN-iPS-imDCs group was significantly longer than that in the SN, iPS-imDCs and PBS groups (P<0.05); 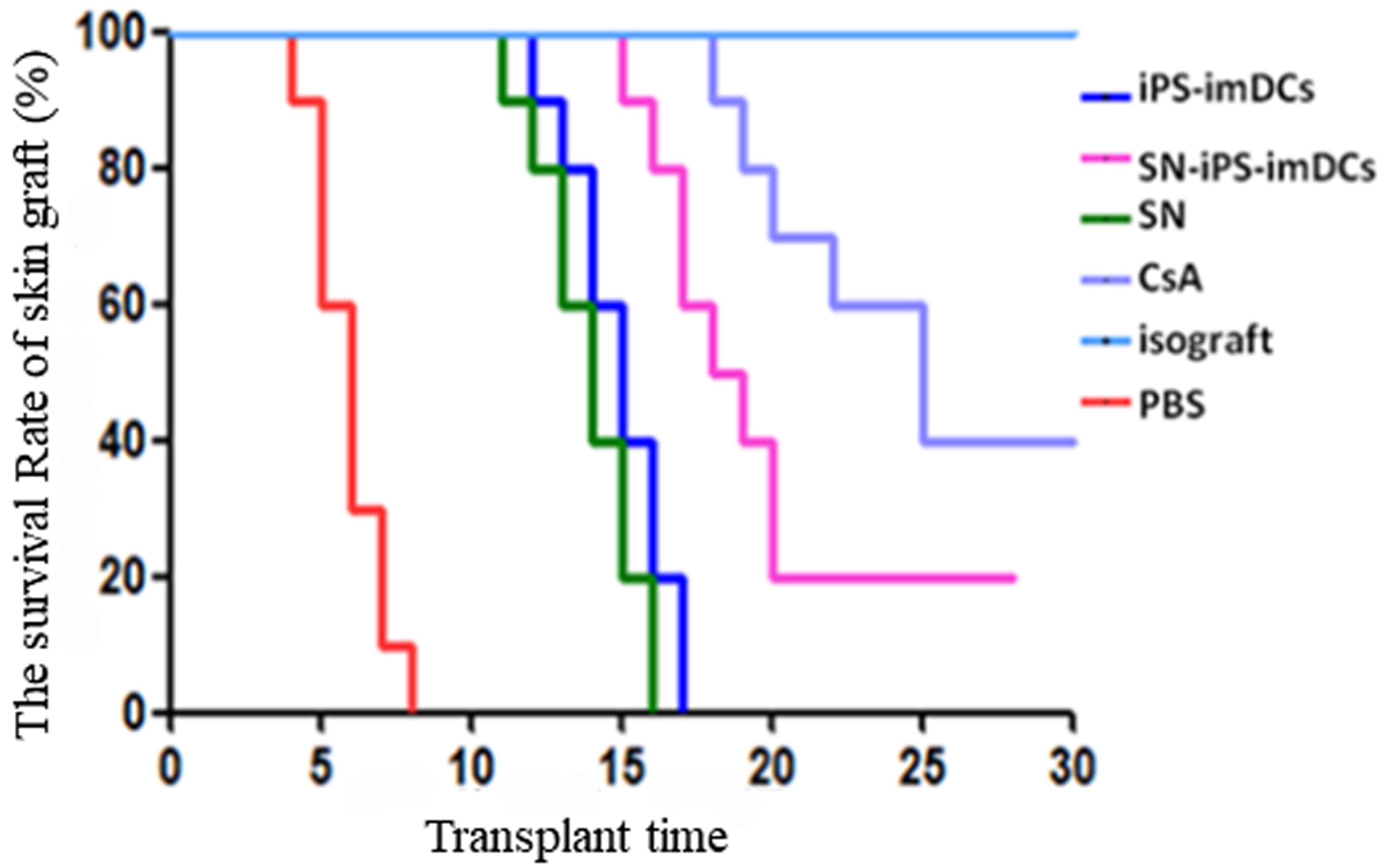