P-9.27 Variation of BKV DNA quantitation in neat and stabilized urine due to target inhomogeneity

Introduction: Infection due to BK virus (BKV) may cause severe clinical disease in transplant recipients. BKV infection most commonly manifests in the kidneys and urinary tract and may lead to polyoma virus nephropathy (PVN) in 10% of kidney transplant patients. Testing of urine samples for BKV DNA levels may offer an initial screening aid for early identification of PVN and its differentiation from graft rejection. The aim of our investigation was to evaluate if urine is an adequate specimen for quantitative testing for BKV DNA.
Methods: We conducted a specimen stability study on BKV positive neat urine and urine added in cobas® PCR Media (CPM) of healthy donors with the protocol shown in Figure 1. For each time point per donor, 3 tubes were prepared by transferring urine into CPM (6 donors x 3 replicates = 18 replicates). The tubes were loaded directly on the cobas® 6800/8800 System and tested with cobas® BKV (Roche Molecular Systems) to measure BK virus DNA. Each tube reflected 1 replicate. 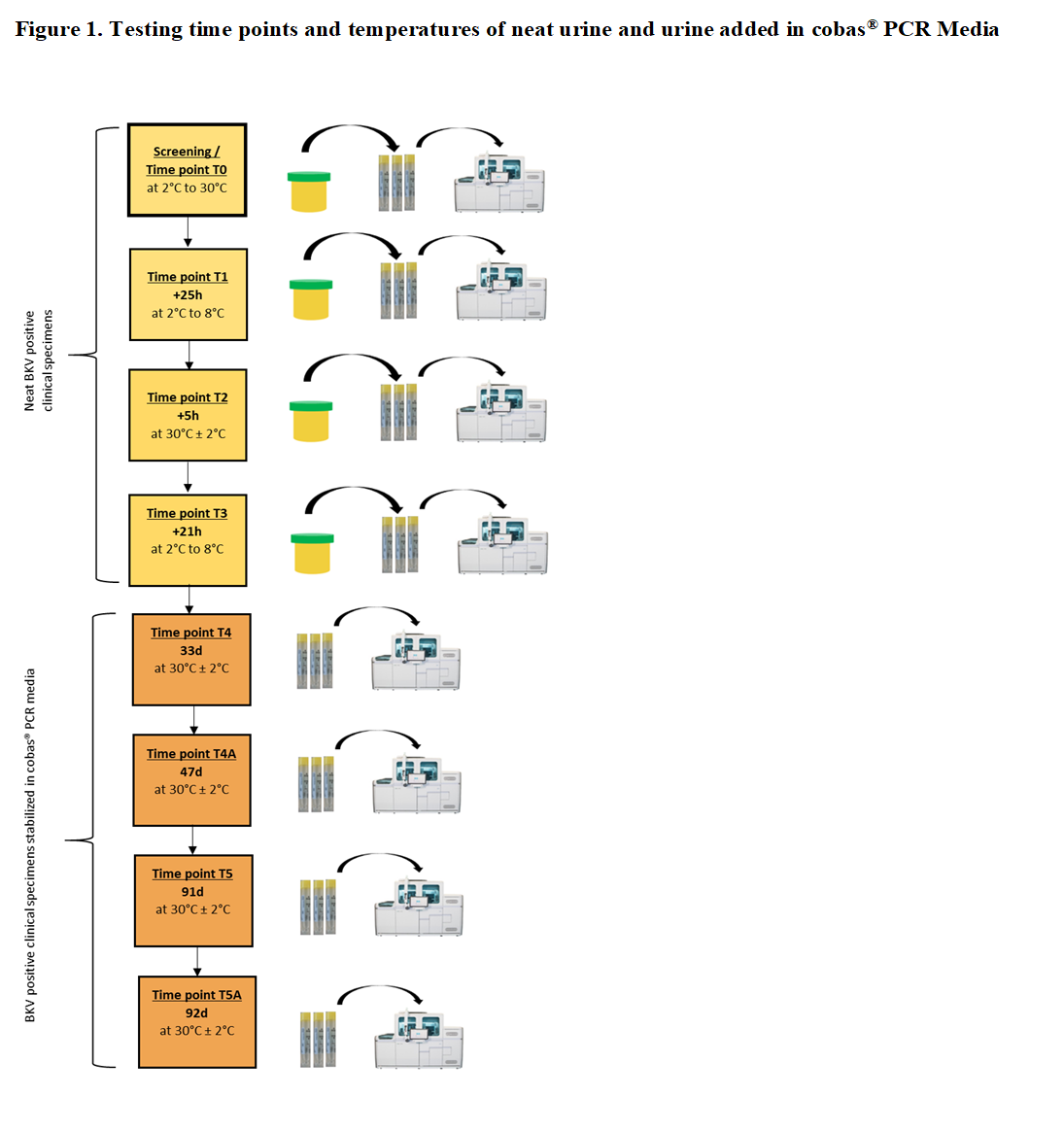 Results and Discussion: The experiments revealed significant differences with offsets of >1 log10 IU/ml within 3 replicates of the same sample when tested at the same time point in neat urine (Figure 2). When urine samples were diluted in CPM the titer remained stable for up to 92 days. Based on these results our working hypothesis was that degradation of BKV DNA in neat urine or BKV clumping and inhomogeneity may affect quantification. In order to determine the level of contribution of these factors to the observed testing inconsistencies we conducted additional experiments. First, the stability of BKV in neat urine was assessed by spiking BKV WHO standard into negative urine samples. The results showed a maximum mean delta log10 titer of +/-0.12 log10 IU/mL indicating that spiked neat urine samples remained stable for up to 25 hours at 30°C prior to addition in CPM. We then tested 12 BKV positive neat and CPM treated urines of healthy individuals. Much higher variation was seen in this sample set compared to contrived samples. Outliers indicating inhomogeneity were seen with both cobas® BKV and artus® BK Virus (QIAGEN) confirming that the phenomenon is related to properties of the clinical specimen type and not assay specific (Figure 3). In addition, when samples were added in CPM, artus® BK Virus and cobas® BKV titers showed strong correlation for a particular sample aliquot, while titer differences could still be observed between aliquots (Figure 4). 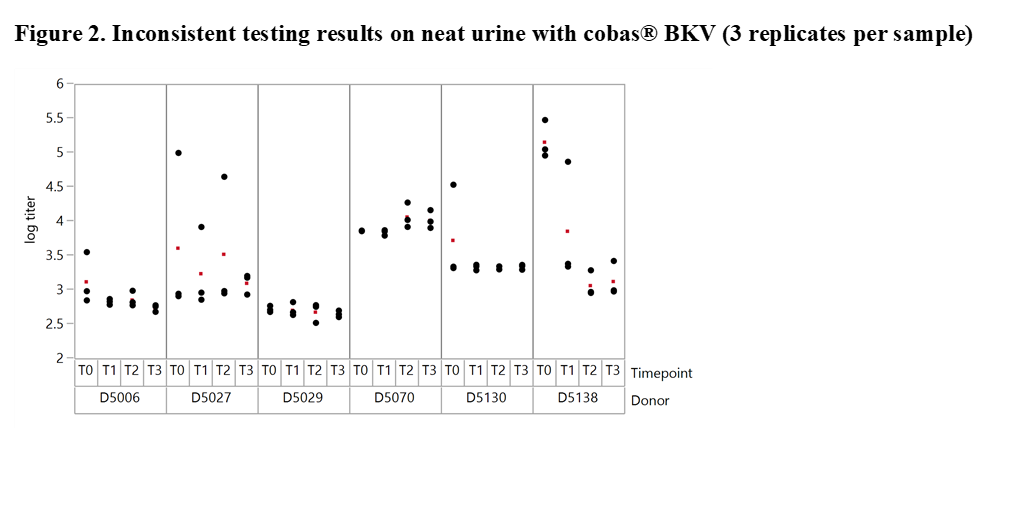 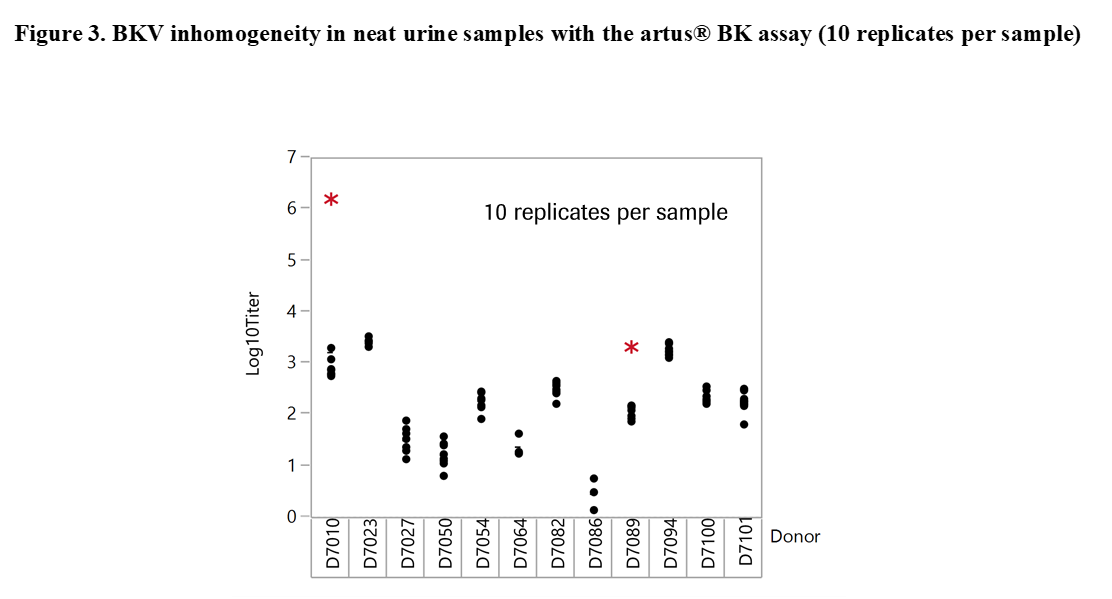 Conclusion: BKV may not be homogeneously distributed in clinical urine samples, which may result in quantitative variability in neat urine assays. Addition of urine in CPM may allow consistent quantitative BKV testing on a particular aliquot.