Background: Invasive pulmonary aspergillosis (IPA) has been recognized as a complication of influenza infection even in immunocompetent patients. We aimed to understand the incidence of IPA as well as other coinfections over multiple seasons in patients with either severe influenza and RSV pneumonia in the intensive care unit (ICU), with a focus on solid organ transplant (SOT).
Materials and Methods: A retrospective cohort study was conducted in a single center in Chicago. Data were collected over six seasons (January 2012 – March 2018) from adult patients admitted to the ICU at a large urban tertiary care center with severe RSV or influenza pneumonia. Patients were included if they had a positive RSV or influenza PCR test, older than 18 years, admitted to the ICU with acute respiratory failure. IPA was defined per both the EORTC/MSG criteria as well as the revised AspICU criteria.[1] Statistics were calculated with Stata 16.0 (StataCorp, TX).
Results: Overall the incidence of IPA was low in patients with RSV or influenza (5.5% and 1.7%, respectively). Patients diagnosed with IPA were both predominantly of male sex in both RSV (87.5%, n=7) and influenza (83.3%, n=6) groups. The median overall length of stay was significantly longer in both RSV (23.6 +/- 4.3 d) and influenza (24.6 +/- 3.7 d) groups with IPA. Patients with RSV that developed IPA had significant mortality (62.5%, p=0.01), while patients with influenza did not (33.3%, p=0.11). In patients with SOT, IPA developed in 16.7% (n=1) of SOT patients with influenza, and 12.5% (n=1) with RSV. All SOT patients with IPA had a history of liver transplantation with comorbidities (malignancy, post-op complications) and developed bacterial coinfections. In patients with severe RSV, history of hematological malignancy and neutropenia showed trends towards the development of IPA. In contrast, those with influenza had a history of hematological malignancy (p=0.03), hematopoietic stem cell transplant (p=0.01), non-transplant related immunosuppression (p=0.01), and history of solid organ malignancy (p=0.01) as significant factors associated with IPA. Other coinfections were common with incidences of RSV and influenza groups at bacterial (27.1% v 46.7%), viral (6.9% v 11.7%), and non-aspergillosis fungal (1.3% v 13.3%). 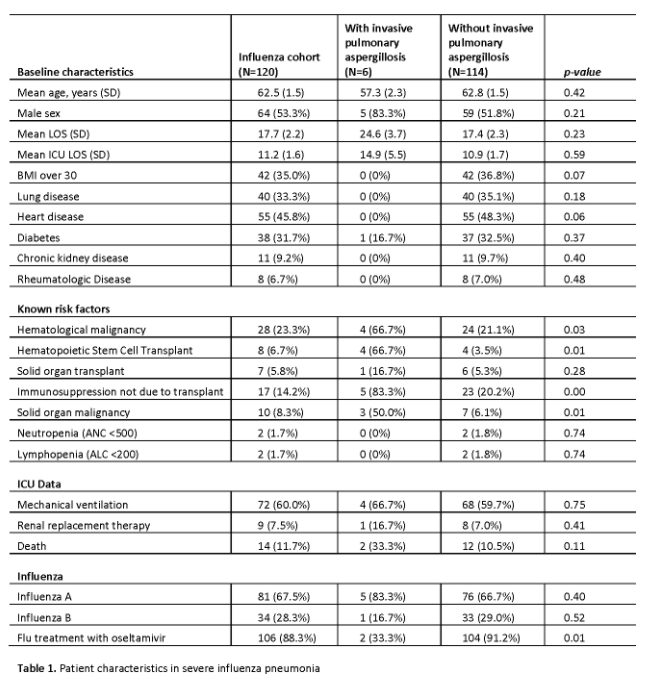 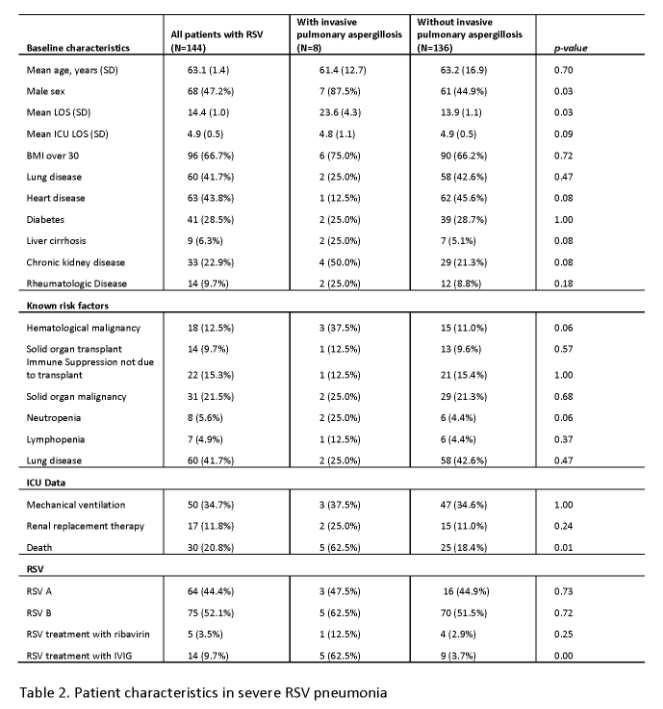 Conclusions and Discussion: The incidence of IPA was significantly lower in both RSV and influenza groups in our study (5.5% and 1.7%) than previously reported in similar studies. While RSV-infected patients with IPA had significant mortality, influenza-infected patients did not. SOT itself does not seem to be a significant factor contributing to the development of IPA in the setting of severe viral pneumonia. At the same time, malignancy and profound immunosuppression are factors strongly associated with the development of IPA. Other coinfections with bacterial, viral, and fungal pathogens are common in those with both severe RSV and influenza pneumonia.