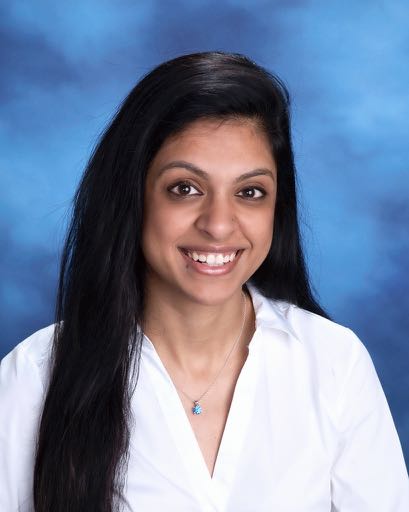 Introduction: The kidney is sensitive to inadequate perfusion, and ischemia time is deleterious to kidney function. Efforts are made to minimize ischemia time, particularly during the kidney transplantation procedure. However, an increasing number of donors undergo ischemia time via cardiac arrest and resuscitation prior to becoming deceased kidney donors. Ischemic pre-conditioning consists of a short period of permissive ischemia prior to prolonged organ ischemia. Research with animal models suggest this may be protective against organ injury short-term, but few studies have been done in human kidneys and even fewer in kidney transplant outcomes. This study assesses the short-term and long-term impact of pre-procurement cardiac arrest (PPCA, i.e. warm ischemia) on post-transplant kidney function.
Methods: Donor and recipient renal function were recorded. Donor PPCA was recorded as the total time (minutes) during which the patient had a loss of cardiac function prior to procurement. Outcomes included graft function and survival up to 10 years post-transplant.
Results: Complete records were available for 1394 transplants.  There 472 donors (34%) with PPCA. PPCA donors had higher serum creatinine levels at presentation, peak level, and final level before procurement (p=0.03, 0.03, <0.001). There was increasing donor serum creatinine for each of these measures corresponding with increasing PPCA time (p=0.001, <0.001, <0.001). Survival at 90-days and 1-year was higher for PPCA donor kidneys (p=0.06 and 0.08). Kaplan-Meier and Cox regression demonstrated graft survival at 10-years to be higher for PPCA kidneys; donors that had at least 40 minutes of arrest time had increased survival at 10 years (p=0.03, 0.06). 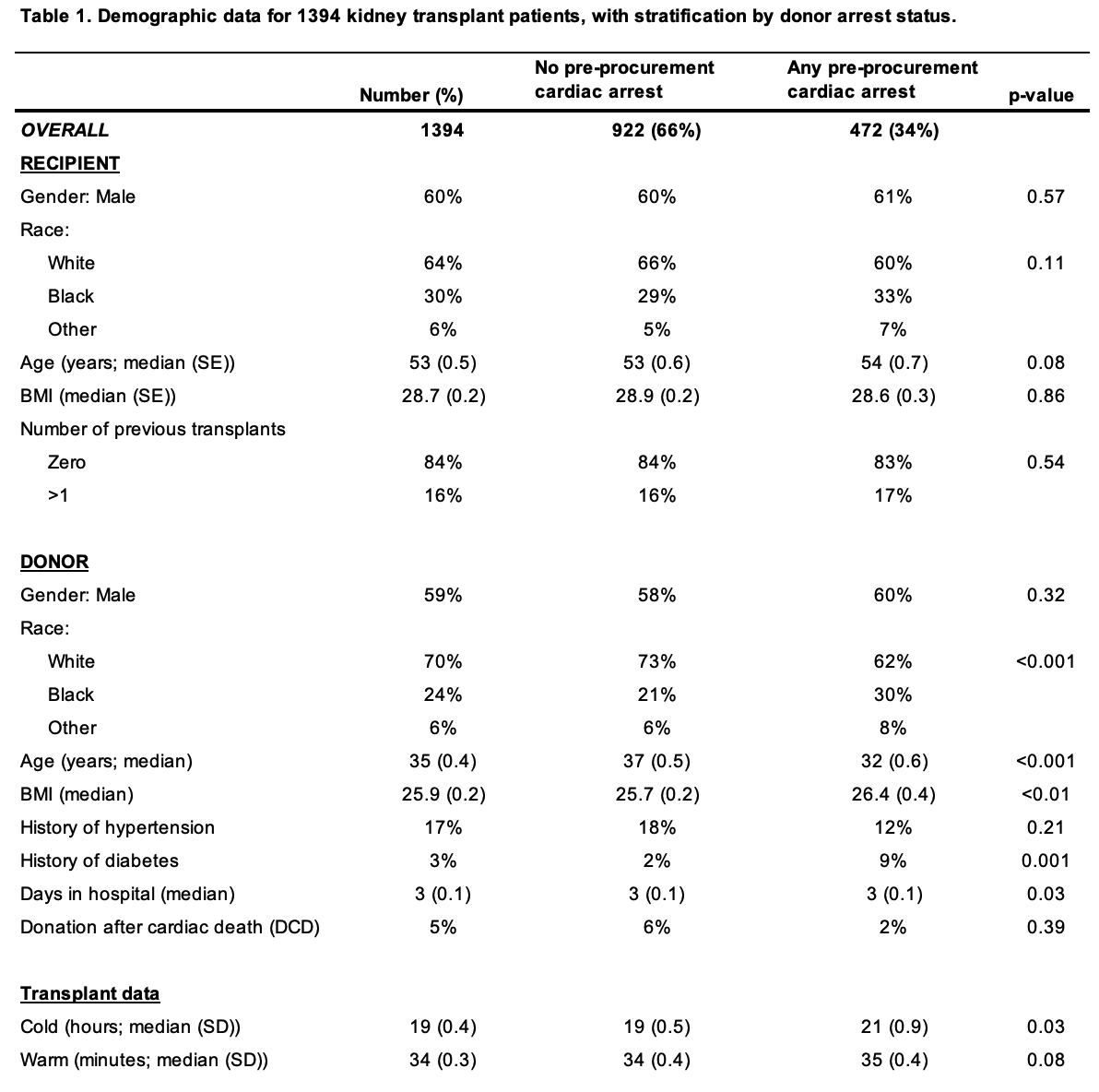 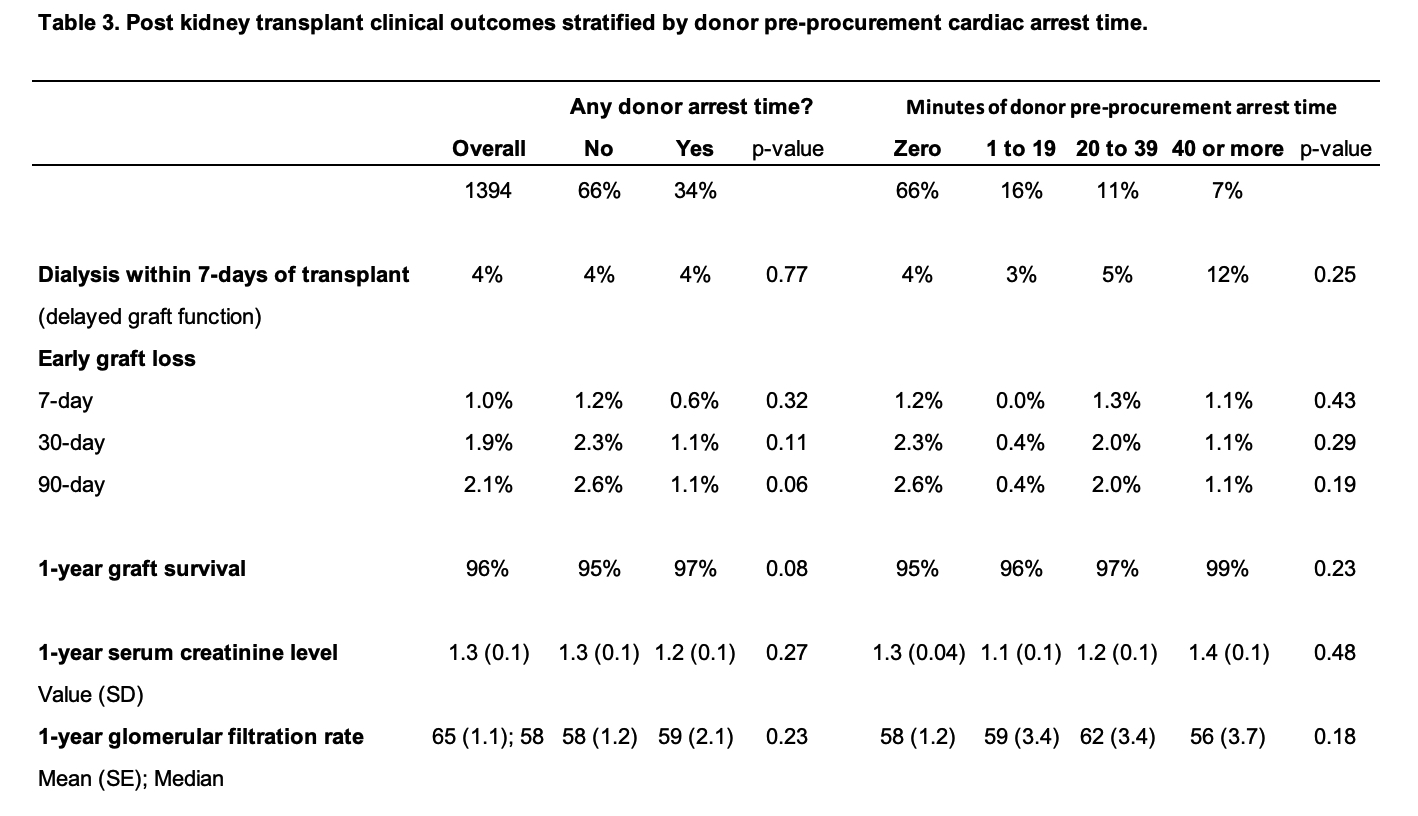 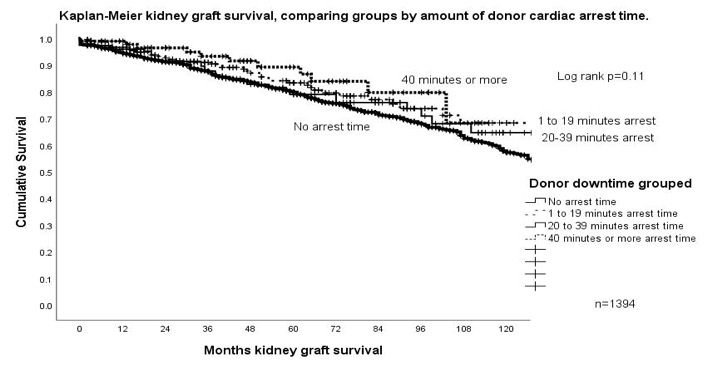 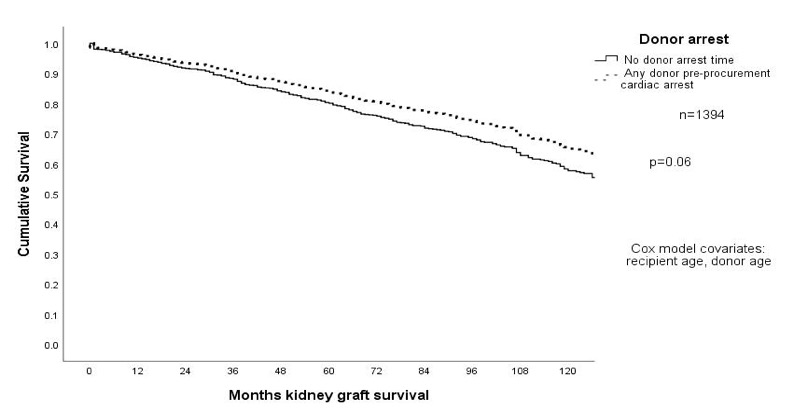 Conclusions: The patients with cardiac arrest time as well as increasing levels of arrest time both had statistically significant higher pre-procurement serum creatinine values compared to donors with no arrest time. However, from 90-days post-transplant and onward, PPCA kidneys were consistently performing better. These results demonstrate no negative effect of PPCA on early and late kidney graft function. Furthermore, these data suggest ischemic pre-conditioning may be beneficial to long-term graft survival up to 10 years post-transplant. There have been studies assessing the impact of PPCA on liver transplantation that conclude potential short-term benefits only. A similar study in pancreas transplant concluded no difference in allograft survival. The impact of PPCA on recipient kidney outcomes has not been studied in a population of this size or time span. The evidence gleaned from this robust database has strong implications for future transplant practices. Not only can providers accept extended criteria donors with a history of cardiac arrest with increased confidence, but kidneys with ischemic pre-conditioning may prove to be more desirable long-term.