P-4.15 It’s not too late to donate...Controlled Donation after Circulatory Death (DCD) of lungs up to 24 hours after Withdrawal of Cardio Respiratory Support (WCRS)

It’s not too late to donate...Controlled Donation after Circulatory Death (DCD) of lungs up to 24 hours after Withdrawal of Cardio Respiratory Support (WCRS)

Purpose: Use of controlled (Category 3) Donation after Circulatory Death (DCD) donors has increased successful lung donations in Australia since 2006. Donation of lungs is considered possible if a patient dies within 90-minutes after WCRS. Within the state of Victoria, Australia, there are estimated to be approximately 10 to 15 potentially suitable lung donors every year who die in the subsequent 24 hours. The Alfred hospital in Australia is a major trauma and transplant centre performing approximately 100 Lung Transplants (LTx) per year. Our aim was to develop a Delayed Lung Protocol (DLP), providing an opportunity for DCD beyond the traditional 90-minute timeframe and up to 24-hours after WCRS. This extended timeframe would increase the donor pool and give more control to the logistics necessary for DCD.
Materials and Methods: Donation team and LTx teams developed the DLP in collaboration with Intensive care unit (ICU), Operating theatre (OT), anaesthetics, perfusion and cardiothoracic surgeons over a 4 year period between 2014- 2018. Due to the non-traditional nature of the DLP and activation of post-mortem interventions, we have used three mock simulations to train all relevant staff involved.
This pathway requires close monitoring of the donor’s blood pressure and pulse oximetry post-WCRS in ICU. If the patient does not die within 90-minutes, retrieval teams waiting in OT return to normal daily routine and the donation theatre is no longer held vacant to facilitate donation surgery. Monitoring continues in the ICU for up to 24 hours. If death occurs, the patient is re-intubated and intercostal catheters (ICCs) are inserted.  Cold perfadex fluid is instilled into the pleural space to topically cool the lungs to minimise warm ischemic time. This method allows up to four hours to make an OT available for the donation surgery to proceed.
Results: The DLP was endorsed in April 2018 with support from the Alfred Hospital’s executive team, managers of both the donation agency, the LTx team, and the Coroner. The DLP has been activated for two actual cases in differing circumstances. The first patient was a male in his mid-40’s who had a severe progressive intracerebral neurological condition and died within the 90-minute timeframe and proceeded to donation through the routine DCD pathway. The second patient was a female in her early 20’s who had an intracranial haemorrhage but died just outside of the 24 hour DLP timeframe. The two dry runs have provided those involved with considerable on-the-job learning that helped fine-tune the DLP. We anticipate that activating this protocol will allow for an additional five to six donors per year at our institution alone.
Conclusion: A collaborative approach has been essential part of developing the DLP. This protocol allows the potential for lung donation to occur outside of the traditional DCD timeframes (90 minutes) and further increase LTx opportunities. 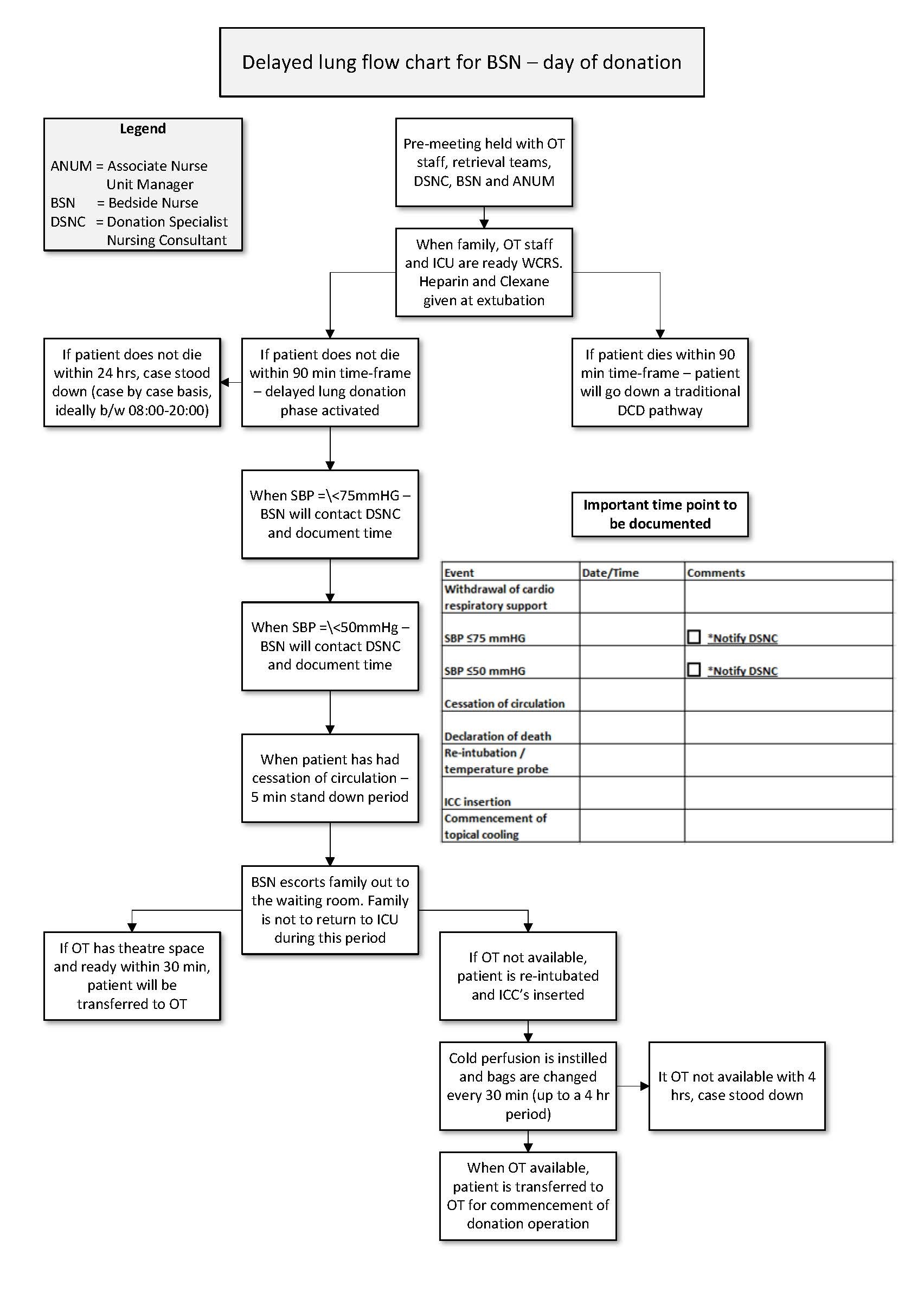