Purpose: It’s estimated that up to 30% of potential living donor/recipient pairs are unable to proceed to living donor kidney transplantation (LDKT) for immunological reasons (ABO incompatibility or positive crossmatch). Kidney Paired Donation (KPD) programs are conducted in various countries for over 20 years, but in Brazil, this kind of exchange is prohibited by law. Our goal was to estimate the potential increases in LDKT if KPD were implemented in Brazil.

Methods: We did a retrospective analysis from 1/2013 to 4/2019 of all the immunologically incompatible donor/recipient pairs in a single center in Brazil. ABO-incompatible donors did not have HLA testing performed, so we randomly assigned HLA to them based on the pool of previous donors from our service. Donor/recipient pairs were considered compatible if they had ≤2 DSAs with MFI sum <3000. An optimized algorithm was used to estimate the number of matches in the Brazilian KPD program. Two scenarios with and without prioritization of sensitized recipients (PRA >80%) were considered. For each scenario, we conducted 10 simulation KPD match runs and determined the average increase in the number of transplants. We also simulated 2 different programs: One allowing only 2-way exchanges and another allowing 2 and 3-way exchanges.

Results: In the period 100 pairs were denied transplant for immunological reasons, involving 89 different recipients and 20.2% of them were sensitized. The results of the simulated KPD match runs are shown in Table 1. Considering the transplants made in our center in the same period, a KPD program could increase the LDKT up to 22.37%. The number of sensitized recipients transplanted could increase by 78.57% when using the prioritizing model. 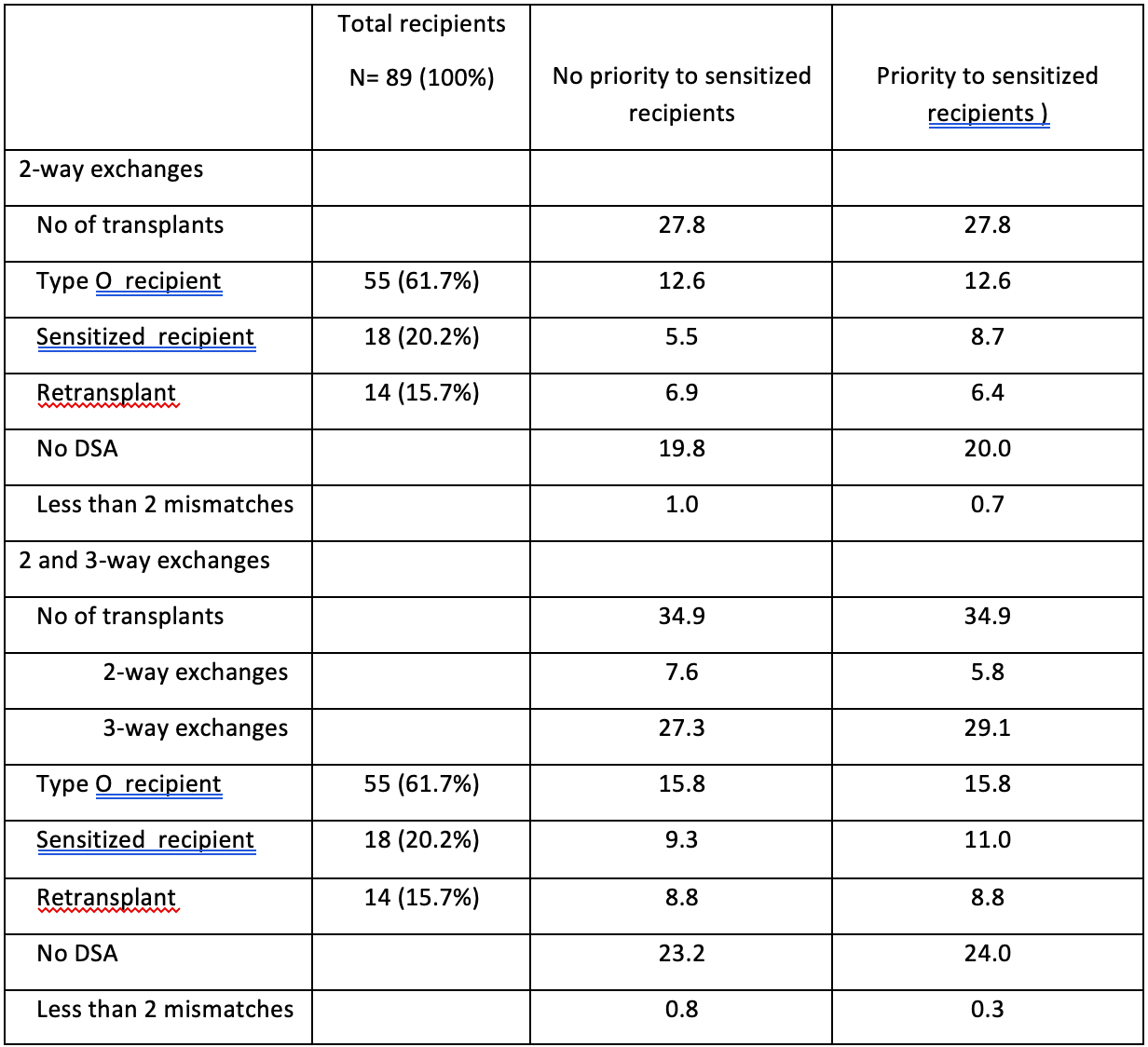 Conclusions: These results show the potential increase in LDKT using a KPD program in Brazil, especially for those sensitized recipients, for who is more difficult to find a donor in the list. As the waitlist in Brazil is increasing faster than the number of transplants, we believe that this is a great strategy that benefits all recipients, as it shorter the list for those waiting for a deceased donor.