Background: European studies have shown that discarded liver grafts can be successfully transplanted if they meet viability criteria during normothermic machine perfusion (NMP). The potential impact of applying NMP to discarded grafts in the United States has not been well-described.
Methods: 21 discarded human livers were perfused for 12 hours using a blood-based perfusate and assessed for viability. Perfusate, bile, and tissue were collected for biochemical analysis, histology, and RNA sequencing. The Scientific Registry of Transplant Recipients (SRTR) database was subsequently queried to analyze the potential nationwide impact of perfusing discarded livers.
Results: Graft characteristics in the NMP cohort were notable for extended cold (mean 9 hours) and warm ischemic times (mean 30 minutes), and steatosis (11 grafts had >20% macrosteatosis). During NMP, 11 of 20 (55%) eligible livers met viability criteria for successful transplantation. In 2018, 724 livers were recovered but not transplanted, and another 1700 eligible grafts were not recovered in the United States. Given similar graft characteristics between our NMP cohort and discarded grafts nationwide (Table 1), a 55% salvage rate could yield an additional 350 grafts annually if all discarded grafts were subjected to NMP. More aggressive recovery of eligible grafts combined with NMP could potentially yield another 800 grafts annually for transplantation.
Conclusion: 55% of discarded livers in this United States series are likely transplantable after NMP. Selective application of NMP to discarded grafts could result in an additional 1100+ liver transplants annually. This would significantly improve access to liver transplantation and alleviate much of the organ shortage within 5 years. 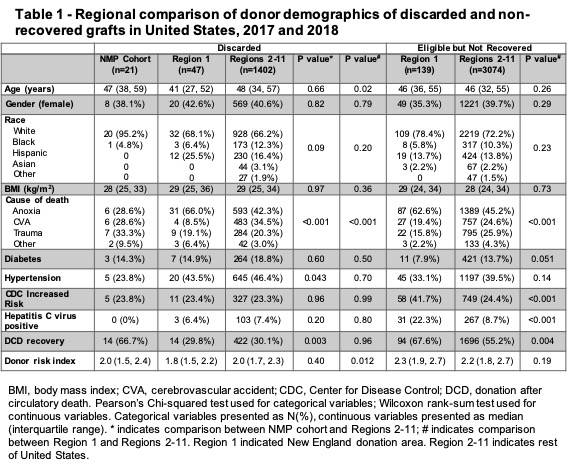