Introduction: Short Bowel Syndrome (SBS) has been considered a disease with low prevalence and incidence disease in Latin-America (LA).  Although estimations could predict a yearly incidence of 8-10 adult patients (pts) in LA, so far there is no centralized registered information. Therefore, in 2015 we started to develop the first centralized registry in Argentina, in order to assess the impact of the disease, to the describe the outcomes and the accessibility to its current therapies.
Materials and Methods: This is a prospective multicenter observational registry; starting in 2017. All participating centers obtained Institutional Board and Ethical committee approval. Data collection was performed using standard case report forms (CRF) and regular monitor visits were scheduled in each center to supervise the performance. Data was centralized by a data entry person. Follow up visits were carried out at weeks 4, 8, 12, 20, 24 and yearly thereafter. Dead, intestinal sufficiency and intestinal transplantation were considered end points. Patients (pts) that missed 2 or more visits were considered lost from follow up.  Statistical analysis was done on SPSS V20.0.
Results: 8/12 of the initiated centers enrolled a total of 50 pts that were monitored and are analyzed; 18 of them completed 1 year of follow up (FU), and 9 completed 2 years of FU; 25 were female; mean age was 49.24 +/- 17.40 years. Pts characteristics and diagnosis are described in table 1. Anatomy type was T1 in 36 pts, T2 in 9 and T3 in 5 pts. Ileo-cecal valve was present in 15 pts and this data was missing in 2 pts. Mean daily ostomy output was 1489.14 +/- 1058.40 ml. Autologous Gastrointestinal Reconstruction Surgery (AGIRS) was performed before enrollment in 17 pts,  and during the study in 13 (Figure 1). Mean time on PN before enrollment was 36.17 +/- 58.78 months. Mean volume of PN at initial visit was 14604.06 +/- 4936.97 ml/ week, and 9096.0 +/- 9514.74 ml/week at the end of the studied period (p:0.001). Mean PN calories was 8872.88 +/- 3595.58 kcal/week at enrollment and 4366.12 +/- 4501.37 kcal/week at the end of FU (p:0,000). ESPEN clinical classification at enrollment and end of FU are shown on Figure 2. Nine patients started teduglutide and 2 of them discontinued PN during the studied period. 8 pts (14%) recovered intestinal sufficiency with AGIRS alone or in combination with teduglutide at a median FU of6 months. The rest of the pts had a significant reduction in PN Kcal, PN volume and days of PN connection/week (p=0.000). Five patients died during the study (10%), the main cause of death was sepsis (80%), and 1 was transplanted; those were the main reasons for FU discontinuation.
Conclusions: In this preliminary report of an ongoing study it can be seen that a high number of adult patients with SBS is identified and treated in the country. Standardizing treatment and follow up as well as collecting and reporting the data would serve for a better understanding of regional and national needs, improving patients’ care and outcome. 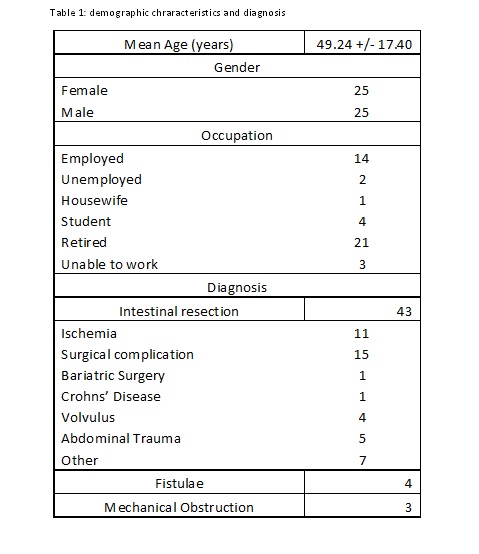 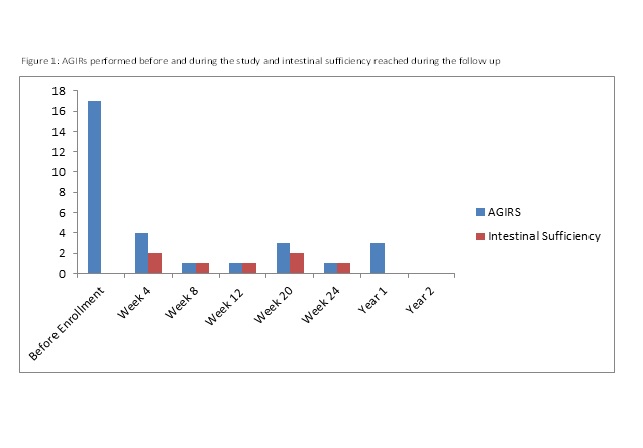 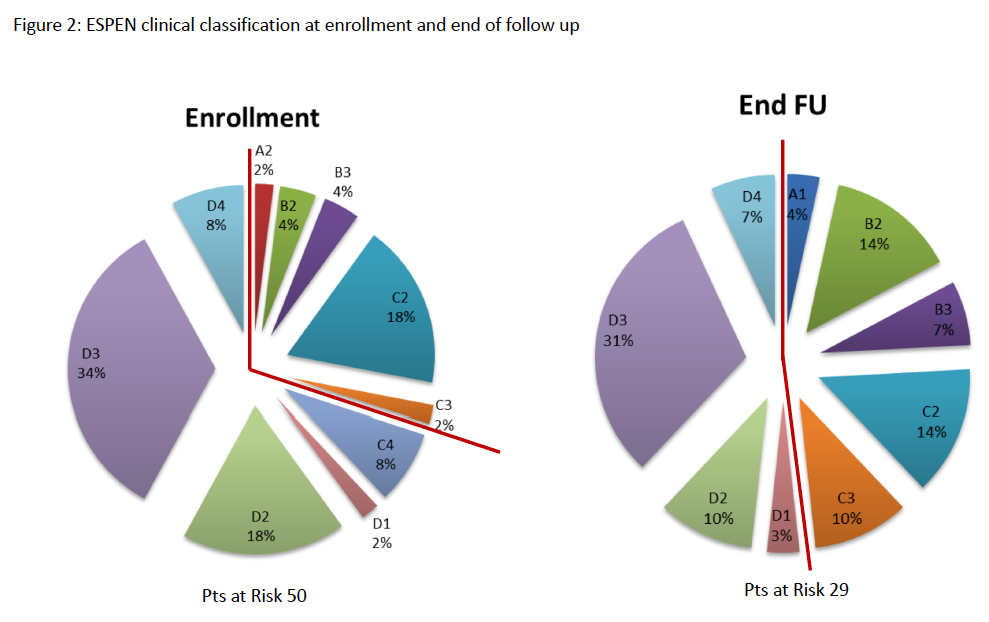