Induction therapy is used prior to kidney transplant to prevent rejection. ABO-incompatible(ABOi) transplantation has a high risk of rejection owing to preformed antibodies. Polyclonal antibodies are used as an induction agent in high-risk kidney transplant.Two different forms of polyclonal antibodies are available for use- Rabbit Anti thymocyte globulin(ATG) and anti-human T-lymphocyte immunoglobulin (Grafalon).(1) The aim of this prospective study was to compare the outcome of ABOi living donor kidney transplant (LDKT) recipients who received either Rabbit Anti thymocyte globulin(ATG) and anti-human T-lymphocyte immunoglobulin(Grafalon) as an induction agent. All ABOi HLA-compatible patients that received a Lve donor kidney transplant between January 2017 and December 2018 at Sir Ganga Ram Hospital, New Delhi were included in the study. Twenty-five patients were given ATG and twenty-two patients received Grafalon. Baseline characters were similar between the two groups. Post-transplant immunosuppression was similar between both groups. All patients received Tacrolimus, Mycophenolate mofetil, and Prednisolone. There was no immediate infusion reaction observed with both induction agents. During the follow-up, no PTLD or malignancy occurred in both groups. The incidence of viral and bacterial infections was similar in both groups. The cumulative incidence of clinical and subclinical antibody-mediated allograft rejection, as well as T-cell, mediated allograft rejection during the first year between ATG and Grafalon was similar (20% versus 32%; p = 0.48 and 20% versus 9%;p = 0.36 respectively).within one year,two patients in ATG group and three patients in Grafalon group died. One patient in the ATG group underwent graft nephrectomy. Kaplan Meier survival analysis was done which showed survival was greater in the ATG group in comparison to Grafalon. 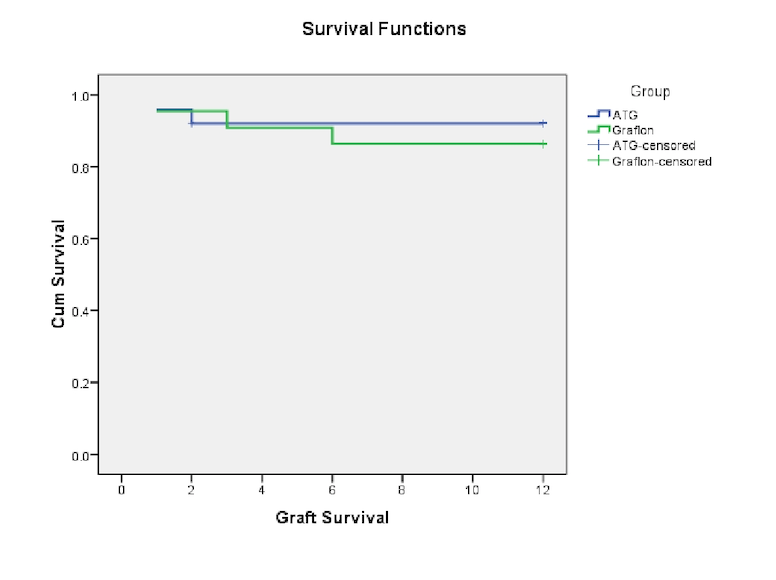