Introduction: Acute kidney injury (AKI) is common and somewhat inevitable consequence of managing deceased donor. The influence of AKI on the outcome after deceased donor kidney transplantation (DDKT) is still inconclusive with recent progress in transplantation field. We are trying to figure out the influence of AKI on DDKT using the data from Samsung Medical Center.
Methods: From 2003 to 2016, 542 cases of DDKT were performed. We excluded pediatric, multiorgan transplantation, re-KT, en-bloc transplantation, horse shoe kidney, and dual kidney transplantation cases. Finally 387 cases were enrolled and we reviewed the medical records of those cases. We tried to find out the effect of AKI on the all of DDKT cases, standard criteria donor (SCD) cases, and expanded criteria donor (ECD) cases. We also tried to find out the effects of induction immunosuppression on donor AKI.
Results: AKI had negative effect on the delayed graft function (DGF). However, there was no significant difference in graft function represented with serum creatinine (sCr) level and estimated glomerulus filtration rate (eGFR). Graft survival was higher in AKI group even though the sCr of donor at the time of DDKT was higher. When DDKT cases were divided according to the donor status, in both SCD DDKT and ECD DDKT cases, AKI was negative on DGF and no effects on graft function and survival. In both SCD DDKT and ECD DDKT cases, anti-thymocyte globulin (rATG) was not positive on DGF, graft function and graft survival contrary to our expectation.
Conclusion: In our data, AKI itself had no negative effect on the outcomes of DDKT but on DGF. rATG did not ameliorated the negative effect of AKI on DGF. 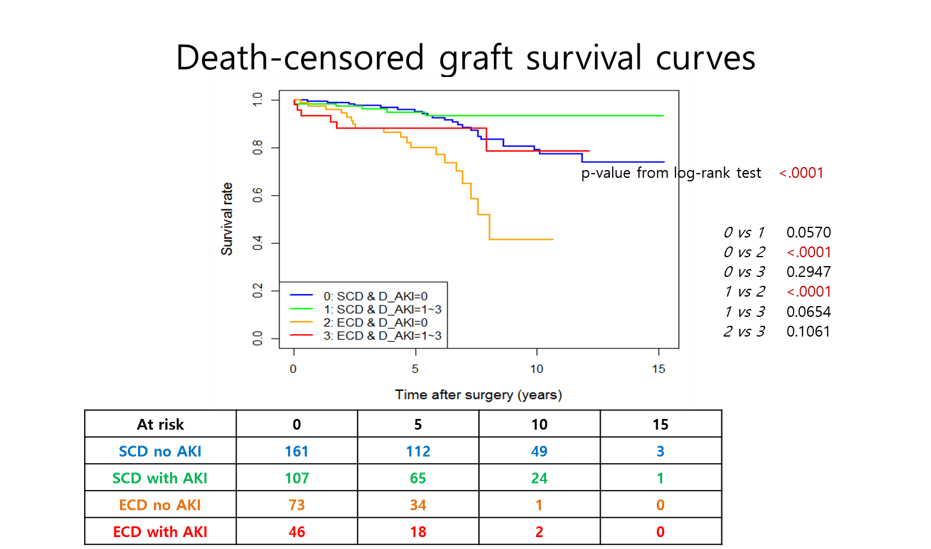