Introduction: In the past decade, the cause of death of recipients who underwent kidney transplantation (KT) has been changed, and cardiovascular disease (CVD) remains the leading cause of death followed by infection and malignancy in kidney transplant recipients. Rapamycin, commonly used mammalian target of rapamycin inhibitors (mTOR inhibitors) after KT for immunosuppression, increases the risk of atherosclerosis by causing hyperglycemia and hyperlipidemia, while also reducing the risk by its anti-proliferative and anti-inflammatory effect. This study aimed to address the cardiovascular risk depending on the load of the rapamycin treatment.
Methods: We retrospectively analyzed 239 patients who received more than a day of oral rapamycin after KT at Severance Hospital from January 2005 to December 2015. Depending on the duration of exposure to rapamycin, subjects were categorized into 3 groups with a 3-year increase. The primary endpoint was a major adverse cardiovascular event (MACE) defined as a composite of myocardial infarction, percutaneous coronary intervention or coronary artery bypass surgery, ischemic stroke, or all cause death.
Results: 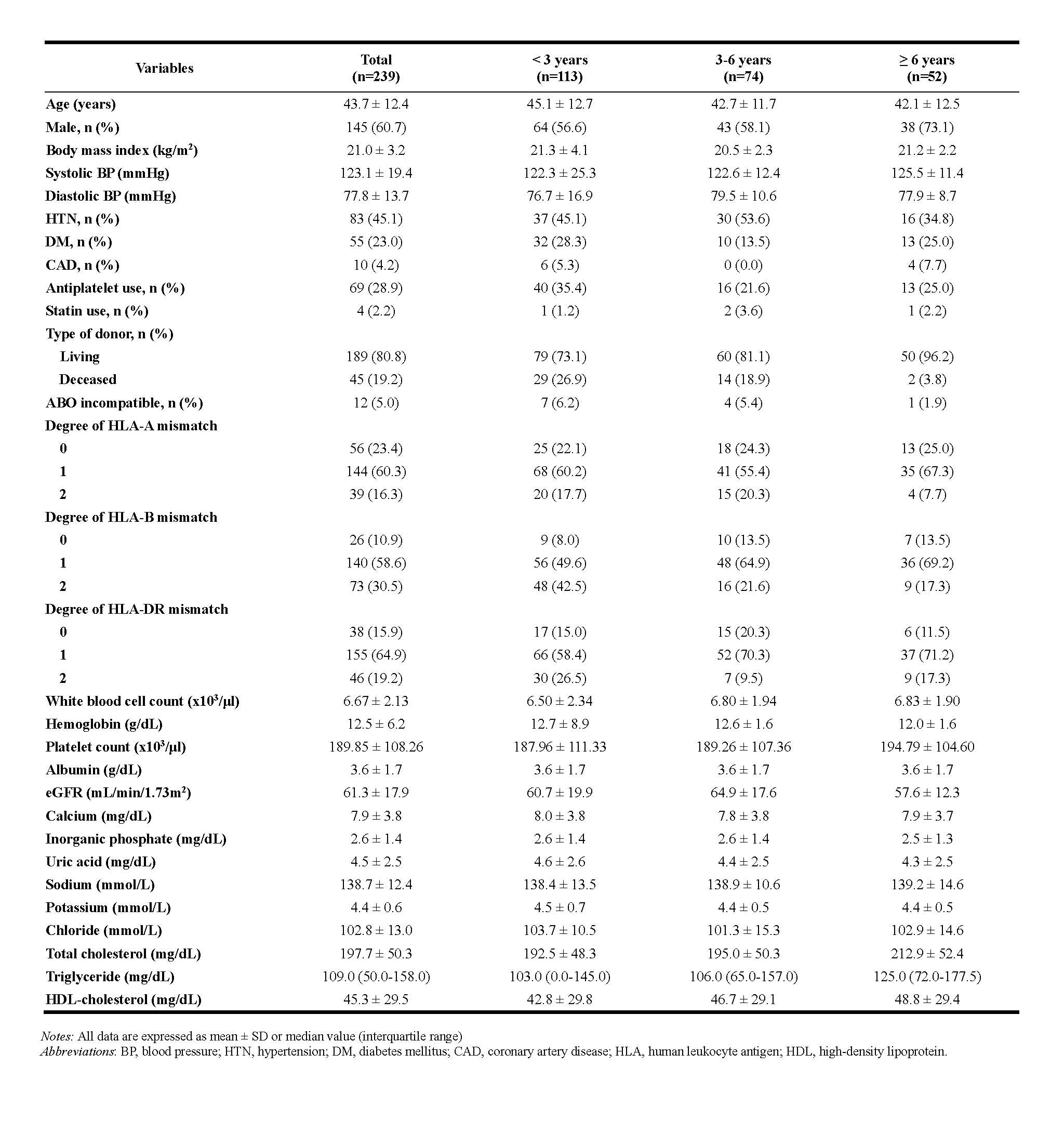 There were 113, 74 and 52 patients in the rapamycin exposure less than 3 years group, over 3 years and less than 6 years group, and over 6 years group, respectively. The KT recipients who were treated rapamycin longer had higher rate of living donor transplantation and lower HLA mismatch degree. The mean follow-up was 8.3 years and the incidence rates of MACE were 16.1, 6.6, and 9.7 events per 1000 persons-years in the shortest, middle, and the longest exposed group. 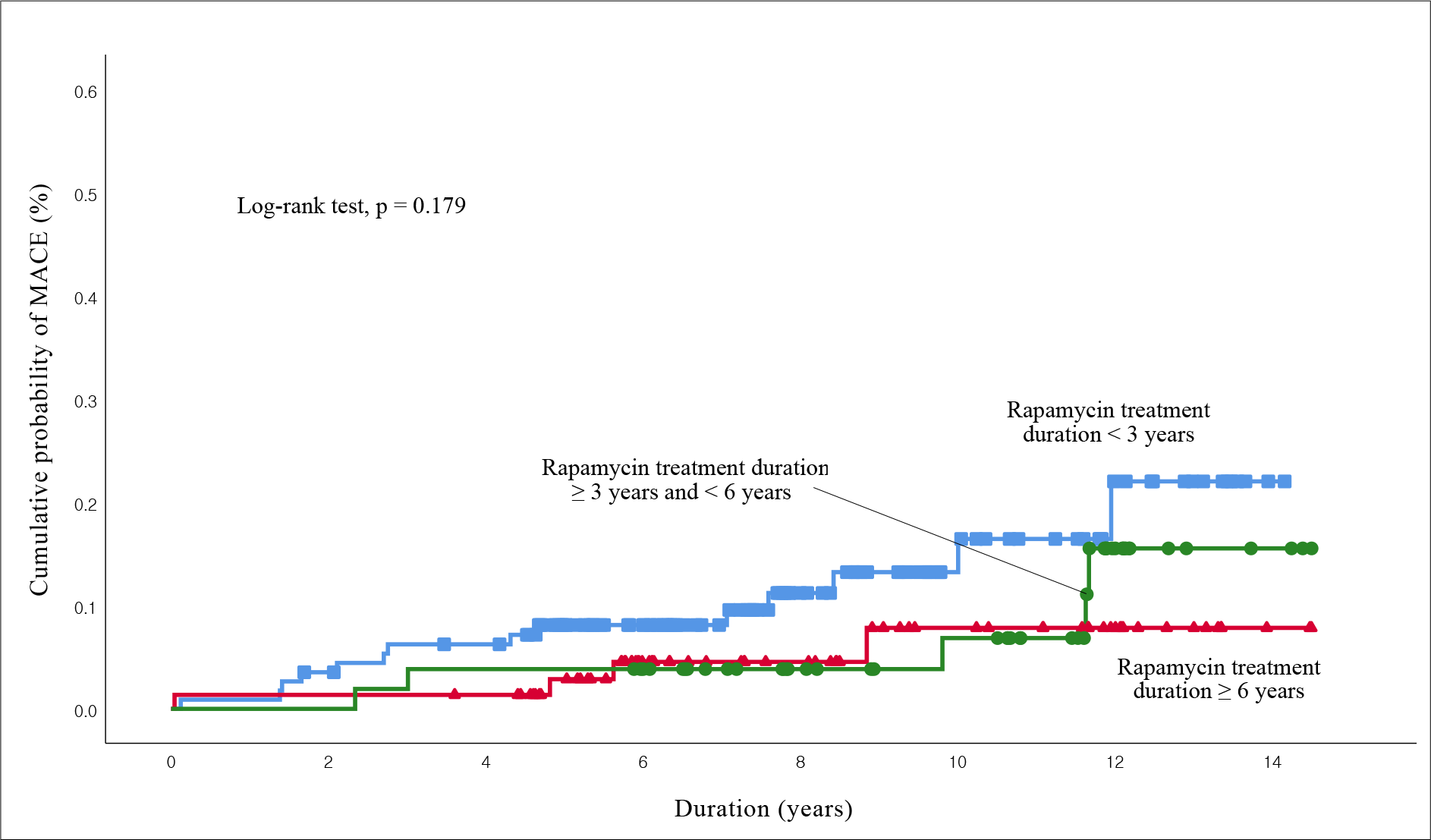 Discussion: This analysis of renal transplant recipients confirmed the MACE outcome according to the duration of rapamycin prescription at an interval of 3 years. Although no significant difference was obtained, the trend that cardiovascular risk decreases as the load of rapamycin increases could be confirmed. Notably, in this study, the mean follow-up duration was 8.3 years, which is a period enough to confirm the cardiovascular outcomes. Limitations of this study include that it was a retrospective analysis of a single arm cohort study with relatively small sample size. All potential confounding variables that are known to influence the cardiovascular outcome, the start and end date of rapamycin treatment and their correlation with the date of MACE, and the combination of other immunosuppressive agents were not controlled.
Conclusions: The risk of MACE tended to be lower as the duration of rapamycin exposure increased. Further studies with larger population will guide appropriate selection of immunosuppressants to prevent CVD.

This study was supported by the Student Research Fund of Yonsei University College of Medicine in 2018.. In this study, Sojung Yoon and Sangmi Lee contributed equally as the first author, and Beom Seok Kim and Kyu Ha Huh corresponded equally as the corresponding authors..

Presentations by Sojung Yoon BE