Introduction: In the United States, one-year graft and patient survival for kidney transplantation surpasses 94%. Despite these excellent outcomes, data on common surgical outcome metrics such as length of hospital stay (LOS) and readmission at 30 days are based largely on single-center reports that lack standard definitions. To improve transplant surgical quality, the American Society of Transplant Surgeons and American College of Surgeons initiated the National Surgical Quality Program (NSQIP) Transplant, which tracks post-transplant outcomes beyond basic graft and recipient survival. After an initial pilot phase, the program has expanded to 29 participating U.S. sites. The purpose of this investigation was to utilize this multi-center, granular, and standardized database to identify potentially modifiable factors associated with readmission and extended length of stay.
Methods: Kidney transplant recipient-donor pairs from 2017-2019 with at least 30 days of follow up were identified from the prospectively-collected NSQIP Transplant database. Readmission rates (defined as readmission <30 days of discharge), extended LOS (defined as >5 days) rates, and recipient and donor characteristics were analyzed. UV and MV logistic regression were performed to identify variables associated with readmission and extended LOS.
Results: A total of 3,408 kidney transplant recipient-donor pairs with complete data were included, 788 (23.1%) of whom had a readmission within 30 days of discharge and 944 (27.7%) of whom had an extended LOS. Compared with patients who were not readmitted, patients who were readmitted were significantly older, had a higher proportion of unemployment, public insurance use, diabetes, history of cardiac revascularization, and hemodialysis (HD) use at transplant (p<0.001 for all, Table). Patients who had extended LOS also were older, more unemployed and had higher public insurance use relative to those with normal LOS (p≤0.02 for all, Table). Readmitted and extended LOS patients also received a higher proportion of kidneys from deceased donors, as well as from donors who were older, donors with higher BMIs, donors with higher KDPIs (p≤0.001 for all).
In MV modeling, unemployment, greater recipient age, higher donor creatinine, higher donor BMI, smoking and hemodialysis were all associated with readmission. Public insurance, donor creatinine, donor BMI and anticoagulation use were all associated with extended LOS. In MV modeling with only deceased donors, higher KDPI was associated with both readmission and extended LOS.
Conclusion: Donor quality (donor creatinine, donor BMI, KDPI) were strongly associated with both readmissions at 30 days and extended LOS even after adjustment for other factors. Employment status and insurance type also demonstrated significant associations, highlighting the substantial role social determinants of health may play in readmissions and extended lengths of stay for kidney transplant recipients. 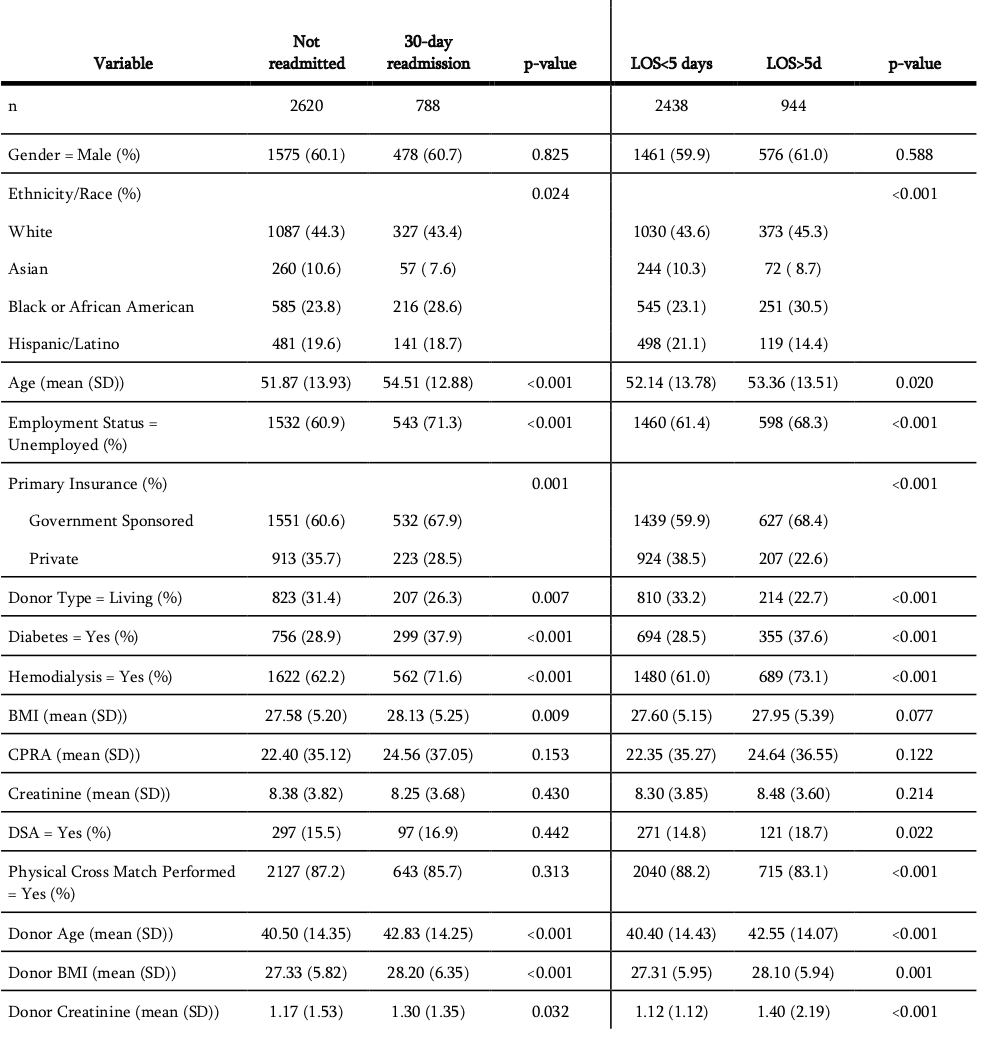