Objective: Transplant renal artery stenosis (TRAS), the most common vascular complication after transplant, leads to resistant hypertension, impaired renal function, and even loss of the graft. The aim of the present study was to evaluate the efficacy of aspirin as a prophylactic for TRAS.
Methods: A retrospective cohort study was conducted in a population of transplant recipients in our hospital. From January 2017 to October 2019, 328 patients undergoing renal transplant were enrolled. Patients were divided into two groups: the study group, comprised of 133 recipients to whom aspirin was administered after transplant, and a control group, including the remaining 195 recipients who did not take aspirin after transplant. The study group was further divided into two subgroups, the early group (100 recipients) and the delayed group (33 recipients), according to whether the time of starting aspirin is at the onset of post-operation. Demographic and clinical characteristics of the recipients, data related to the surgery and postoperative treatment, laboratory data, and imaging documents were assessed. Primary outcome measure was the morbidity of TRAS. The prophylactic efficacy of aspirin against TRAS was comprehensive evaluated by assessment of renal artery inside diameter with vascular ultrasonography or angiography, measurement of blood pressure and evaluation of biochemical graft function. Statistical analyses were performed with the software of SPSS 17.0.
Results: All recipients were treated with the same induction therapy and standard maintenance program, and there was no significant difference in gender, age, type of transplant and other clinical characters between the two groups (P > 0.05). The length of period continued taking low-dose aspirin was more than 3 months in the study group. With a mean follow-up of 1.4 years, the occurrence of TRAS was 35(10.67%, 35/328) in all enrolled. And among them, it was 8 (6.02%, 8 / 133) and 27 (13.85%, 27 / 195) in the study and control groups, respectively. The difference between the two groups was statistically significant (P = 0.024). The case number of undergoing renal artery angiography and balloon dilatation was 1 and 22 in the study and control groups, respectively. The difference between them was statistically significant (P = 0.001). Time of occurrence of stenosis was latter and morbidity of cerebrovascular complications was lower in the study group, but this degree was modest, statistically non-significant and thus of uncertain clinical significance. Subgroup analysis showed that the morbidity of cerebrovascular complications in the early group and the delayed group were statistically significant (P = 0.002) indicating the earlier start, the more benefits. No serious adverse events was observed.
Conclusion: Clinical application of low-dose aspirin after renal transplant may benefit as a prophylactic for TRAS. (Further prospective study is going on: NCT04260828) 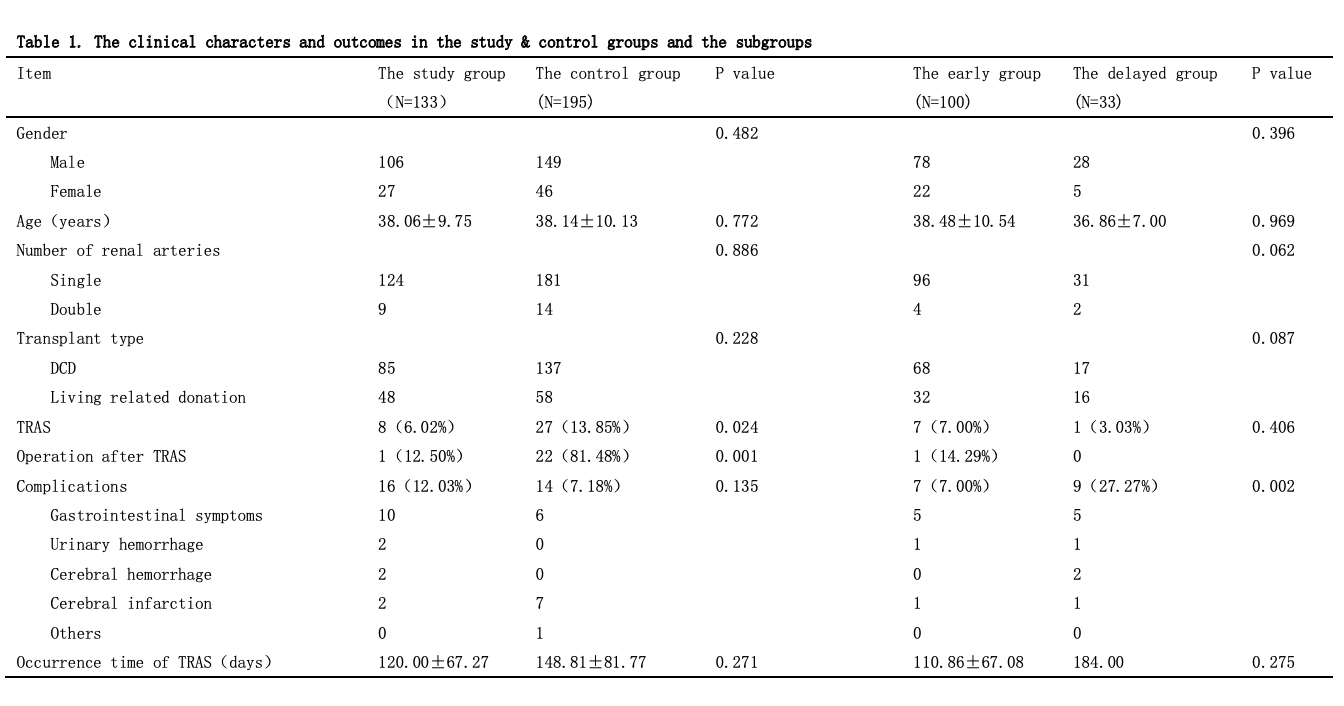