Background: In Japan, transport time, HLA matching, waiting time and recipient’s age (aged less than 20 years old) are priorities in the graft allocation program.
The donor’s age has long been recognized as a key determinant of allograft survival in deceased donor kidney transplantation. However, few studies have been published regarding the relationship between donor age and graft survival that include the recipients age.
Patients and Methods: We have studied 809 recipients(R) who received a deceased donor(D) transplant in Japan between 2000 and 2013. In this retrospective study we analyzed the influence of donor age and recipient age(G1；R＜50y、D＜50y(n=180),G２：R＜50y、D≧;50y（n=201）G３：R≧50y、D＜50y（n=187）,G４：R≧50y、D≧50y(n=241)) on renal allograft survival and their relationship.
Results: Using the Kaplan-Meier curve, the one-year survival rates were 94.9% for G1, 97.3% for G2, 96.8% for G3, and 92.1% for G4, but there was no difference.
The death with graft function were observed in 10 cases in G1, 2 cases in G2, 27 cases in G3, and 39 cases in G4, respectively, and was clearly observed in elderly recipients.
The 10 years graft survival rates with DWFG was engrafted, and there was no significant difference between the 4 groups(G1; 73.6%, G2: 72.7%, G3: 80.5%, G4: 78.2% P=0.329). 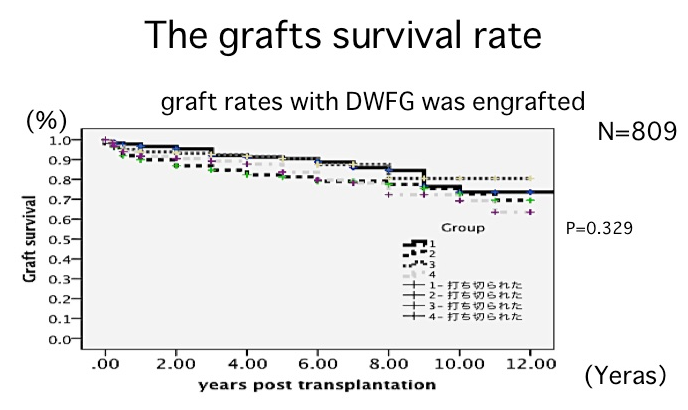 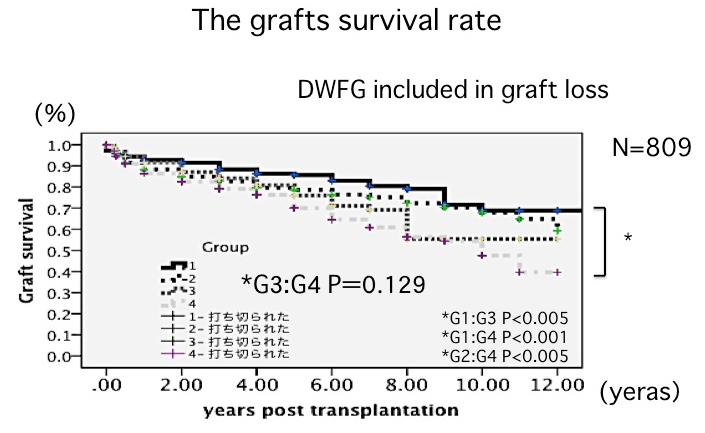 Conclusion: The kidneys from older deceased donors were associated with worse graft survival rates especially in younger recipients. DGF was the primary factor in lowering the outcome of kidney transplantation, and a difference in the survival rate due to DGF was observed in elderly recipients. It is necessary to consider age-based sorting in selecting young recipients who have long lives.