Introduction: In a living donor kidney transplantation (LDKT) dominated transplant program, kidney exchange may be a cost-effective and valid alternative strategy to increase LDKT in countries with limited resources where deceased donation kidney transplantation (DDKT) is in the initial stages. There is data scarcity of challenges and solution for kidney exchange in developing world. Here, we report our experience of 440 single-centre kidney exchange transplantation to increase LDKT in India.
Methods: The study has been reviewed by the appropriate ethics committee and has therefore been performed in accordance with the ethical standards laid down in Declaration of Helsinki as well as the Declaration of Istanbul. All donor-recipient pairs (DRP) gave their informed consent prior to their inclusion in the study. All pairs exchange kidney of similar quality.
Results: Between January 2000 and March 2020, 4558 LDKT and 920 DDKT were performed at our single centre, 440 using kidney exchanges (9.6%) (350 male, 90 female recipients ; 345 female and 95 male donors).The reasons for joining kidney exchange among transplanted patients were ABO incompatibility (n = 316), sensitization (n = 84) and better HLA matching (n = 40). There were 164 two-way (n =328), 23 three-way (n = 69), 4 four-way (n = 16), 1 five-way (n=5), 2 six-way (n=12) and one ten-way kidney exchange (n = 10). The state of residence of DRP were our state (Gujarat=254), and other states (n=186). Most common donors were spouse (67%) and parents (27%).There was overwhelming preponderance of female donors (wife and mother) but similar to our LDKT program. The graft survival, patient survival, biopsy proven rejection rate and graft function was similar to other LDKT outcome. It is important to recognize that over the 20 years our kidney exchange program has evolved into the large, advanced program with innovative approaches to further increase LDKT. We credit the success of our kidney exchange program to maintaining a registry of incompatible pairs, counselling on kidney exchange, a high-volume LDKT program and teamwork. 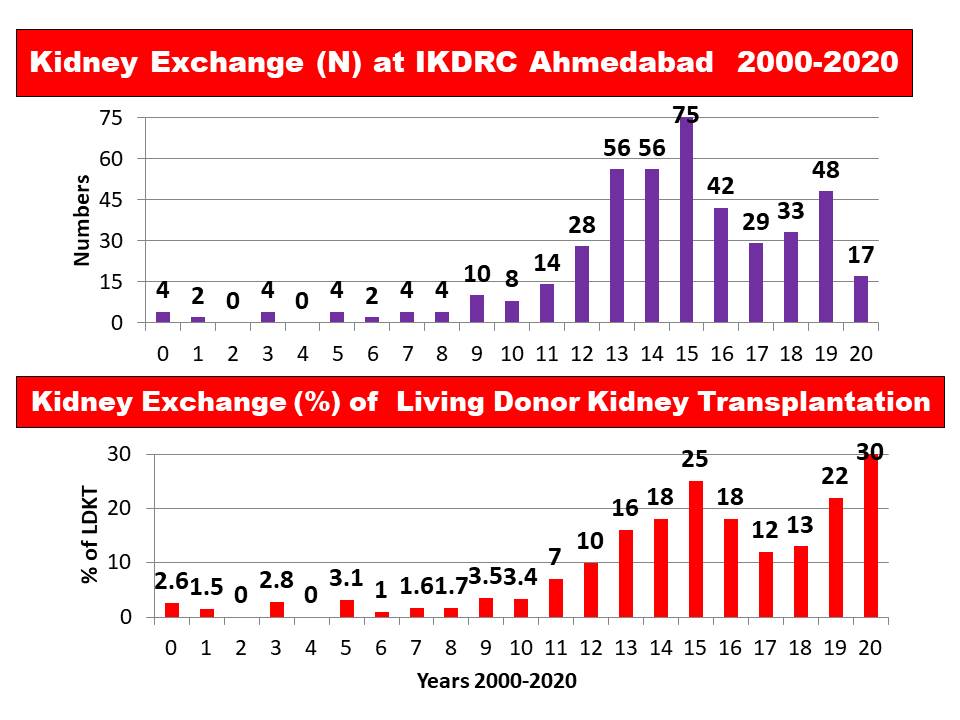 Conclusions: Kidney exchange is legal, cost effective and rapidly growing for facilitating LDKT with incompatible donors. This study provides large-scale evidence for the expansion of single-centre LDKT via kidney exchange when national programmes do not exist.