Background and Objectives: Renal allograft function, is not only dependent on immunological factors but also on age, gender and  the weight of the donor which has not been studied much. The objective of this study was to see the outcome with mismatch of the sex and especially the weight of the donor and recipient graft function.
Materials and Method: A retrospective analysis of 50 patients with stable graft function was noted at the end of 15 days,3 months, 6 months and 1 year after renal transplant. Patients who had infection and rejection post transplant were excluded from study. Donor-recipient sex pairings (male donor–male recipient; female donor–female recipient; male donor–female recipient; female donor–male recipient) was done. Weight was used a surrogate marker for kidney size and mismatch was categorized into match (donor weight/recipient weight x 100) : less than 75%(small donor kidney),75-125%(weight matched kidney) and greater than 125%(large donor kidney). Age was divided in 5 groups into 30-40 yr,41-45 yr,46-55yr, 56-65yr and 66-70 yr). Similarly donor weight(kg) was also divided into five groups( 51-60,61-70,71-80,81-90and>90kg). Paired ‘T’ test and correlation and regression analysis were applied .
Results: Out of the total 50 donor studied, 20 were male and 30 were female. Female recipient had better outcomes as compared to male recipient(1.07 vs 1.18mg/dl) . Female to female had the best outcome(1.01mg/dl) while female to male had worst outcome(1.19mg/dl). According to weight match , the outcome for large donor was better especially in initial 6 months(1.13 vs 1.19mg/dl). Weight of the donor had a moderate negative correlation(r=-0.31) with s.creatinine level while the weight of recipient had a weak positive correlation(r=+0.07). The recipient with higher donor weight had better graft function(1.06 vs 1.27mg/dl)  but without recipient weight adjustment. The paired ’T’’ test was statistically not significant(p value>0.05). 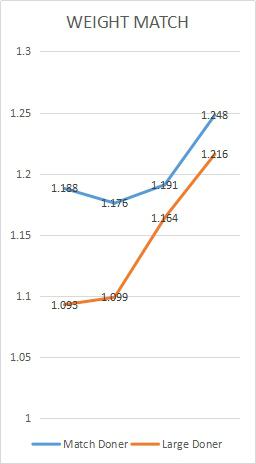 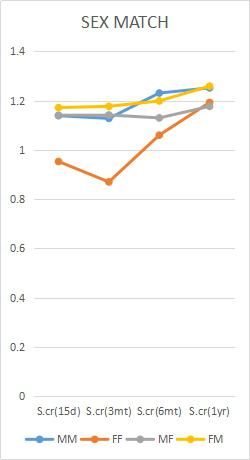 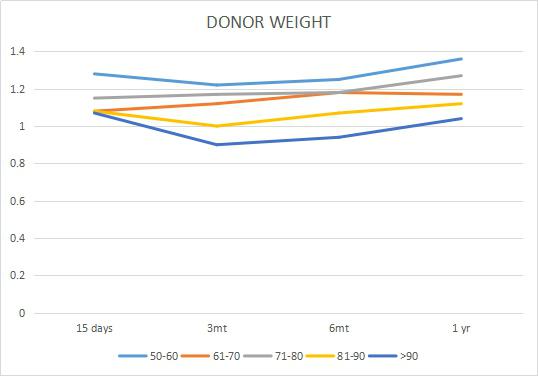 Discussion: As found in this study female had better graft function as recipient compared to males, while male served as better donor. It is hypothesized that larger donor kidney mass as compared to recipient provides more number of glomeruli with less demand of hyperfiltration on the transplanted kidney and less injury over the long term.The actual volume of the transplanted organ and BSA has been measured in studies and have found variable data.  Female kidneys are smaller and have lesser  nephrons as compared to male and can cause mismatch in equal weighted female donor and male recipient.
Conclusion: Male recipient should receive weight matched donor preferably a male or  higher weight if donor is female. Whereas a female recipient can receive equally matched female or male donor. The long term graft function is dependent on these factors and should be taken into consideration before rushing for early transplantation. Further similar larger studies would provide a better insight.