Introduction: Left ventricular hypertrophy (LVH) is highly prevalent in patients with end-stage renal disease and a known predictor of adverse cardiovascular (CV) outcomes. Using two echocardiographic parameters of relative wall thickness (RWT) and left ventricular mass index (LVMI), LVH can be diagnosed and further classified into three subcategories: concentric hypertrophy, concentric remodeling, and eccentric hypertrophy. Studies have shown regression of LVH after kidney transplantation (KT), but have excluded consideration of LV geometry (LVG) and the repercussion on allograft status. We aim to provide an assessment of LVG changes depending on allograft status and its association to death and graft loss post-KT.
Material and Methods: This is a retrospective cohort study of 102 adult patients that underwent ≥1 KT between 2009 and 2018 at UCSF Medical Center and who had complete echocardiographic assessments, including RWT and LVMI measurements, performed both pre and post-KT. The primary predictors were RWT, LVMI, and LVG patterns (normal and LVH subcategories). Paired t-test and Wilcoxon matched-pairs signed-rank test were used to evaluate echocardiographic changes post-KT. Pre and post-KT changes were further stratified by graft status at the time of post-KT echocardiography. Cox proportional hazards regression analysis was performed to examine the associations between pre and post-KT LVG with the primary outcomes of death and graft loss after KT.
Results and Discussion: Table 1 shows the cohort’s baseline characteristics and outcomes. 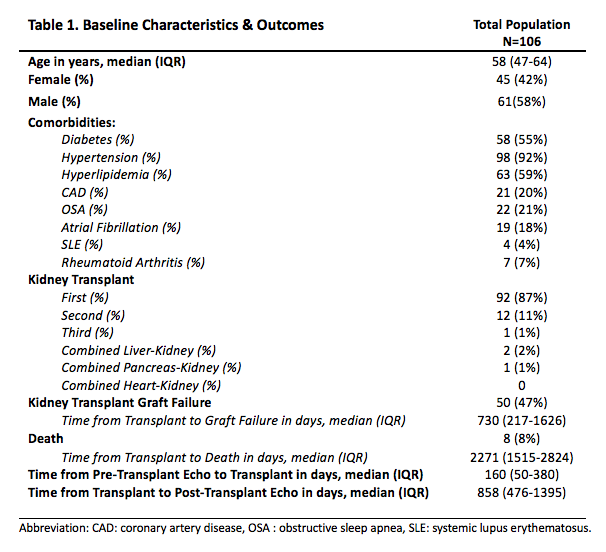 A paired t-test was statistically significant for changes in LVMI (p=0.01) and RTW (p=0.04), but not for LVG changes after KT regardless of allograft status.

LVMI regression and worsening RWT were observed after KT. LVG changes were statistically significant (p 0.018) in the post-KT echocardiogram for patients with functioning allografts. The proportion of patients with concentric hypertrophy decreased from 38 (47%) pre-KT to 26 (32%) post-KT among patients with functioning allografts. The most frequent LVG pattern after KT was concentric remodeling (49%). For patients with allograft failure, there were no significant pre and post-KT changes seen in LVMI, RWT, or LVG patterns after KT. There were no significant associations between LVG and all-cause mortality nor between LVG and graft loss. Table 3 shows the distribution of LVG patterns pre and post-KT.

Conclusion: KT is associated with LVMI regression, worsening RWT, and significant shifts in LVG patterns. Understanding changes in LVG stratified by allograft status after KT and its associations with adverse outcomes could help prevent poor CV outcomes in KT patients. Kidney allograft loss affected the progression of LVG changes after KT. LVG patterns were not associated with post-KT mortality or graft loss. More research is needed to further investigate the possible implications of worsening RWT after KT.