Background: The dialysis patients were exposed in danger of sensitization, repeated blood loss, volume overloading, comorbidities such as cardiovascular disease (CVD) or infection. For this reason, it is reported that preemptive kidney transplantation (PKT), defined as KT performed before beginning of maintenance dialysis, has a better prognosis than non-preemptive KT (NPKT) in living donor kidney transplantation (LDKT), but the factors related with the good prognosis and clinical outcome of PKT are still uncertain.
Methods: We retrospectively analyzed the medical records of 890 patients performed LDKT at Keimyung university Dongsan hospital between 1982 and 2019. We investigated baseline characteristics, the incidence of delayed graft function (DGF), acute rejection within 1 year, the risk factors associated with allograft failure, graft and patient survivals between PKT and NPKT groups.
Results: Mean follow-up duration of 890 recipients was 219 months. Mean ages of donors and recipients were significantly higher in the PKT group than non-PKT group (41.7±11.5 years vs. 39.3±12.3 years, P=0.019; 40.0±12.9 years vs. 37.8±11.9 years, P=0.032).There were no significant differences of the rate of gender, HLA mismatched number, the cause of end-stage renal disease, immunosuppressant, and preformed HLA-DSA. There were no significant differences of the incidences of DGF, incidence of de novo HLA-DSA, and acute rejection within 1 year between the two groups. Death-censored graft survival rate was significantly higher in the PKT group than NPKT group (P=0.002). The dialysis vintage was an independent risk factor for allograft failure (HR 1.031, 95% C.I. 1.011-1.050, P=0.002). There were no significant differences of patient survival rate and the incidence of comorbidities such as CVD or infection between the two groups.
Conclusions: In our study, PKT showed a better allograft survival rate compared to NPKT, but no difference of patient survival rate between the two groups. The factor associated with the difference of allograft survival between the two groups was dialysis vintage. Therefore, it is better to perform PKT aggressively rather than waiting for a KT for a long time on dialysis to maintain the long-term graft survivals. 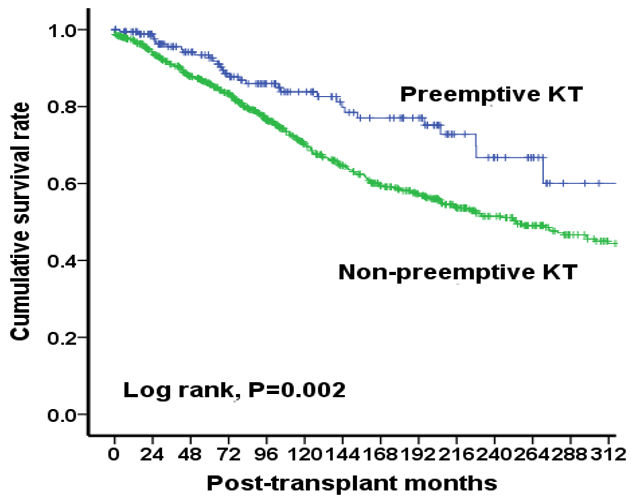 This study was supported by the First Research Support Project of the National Research Foundation of Korea (NRF) funded by the Ministry of Science and ICT in 2018 (NRF-2017R1C1B5076739)..