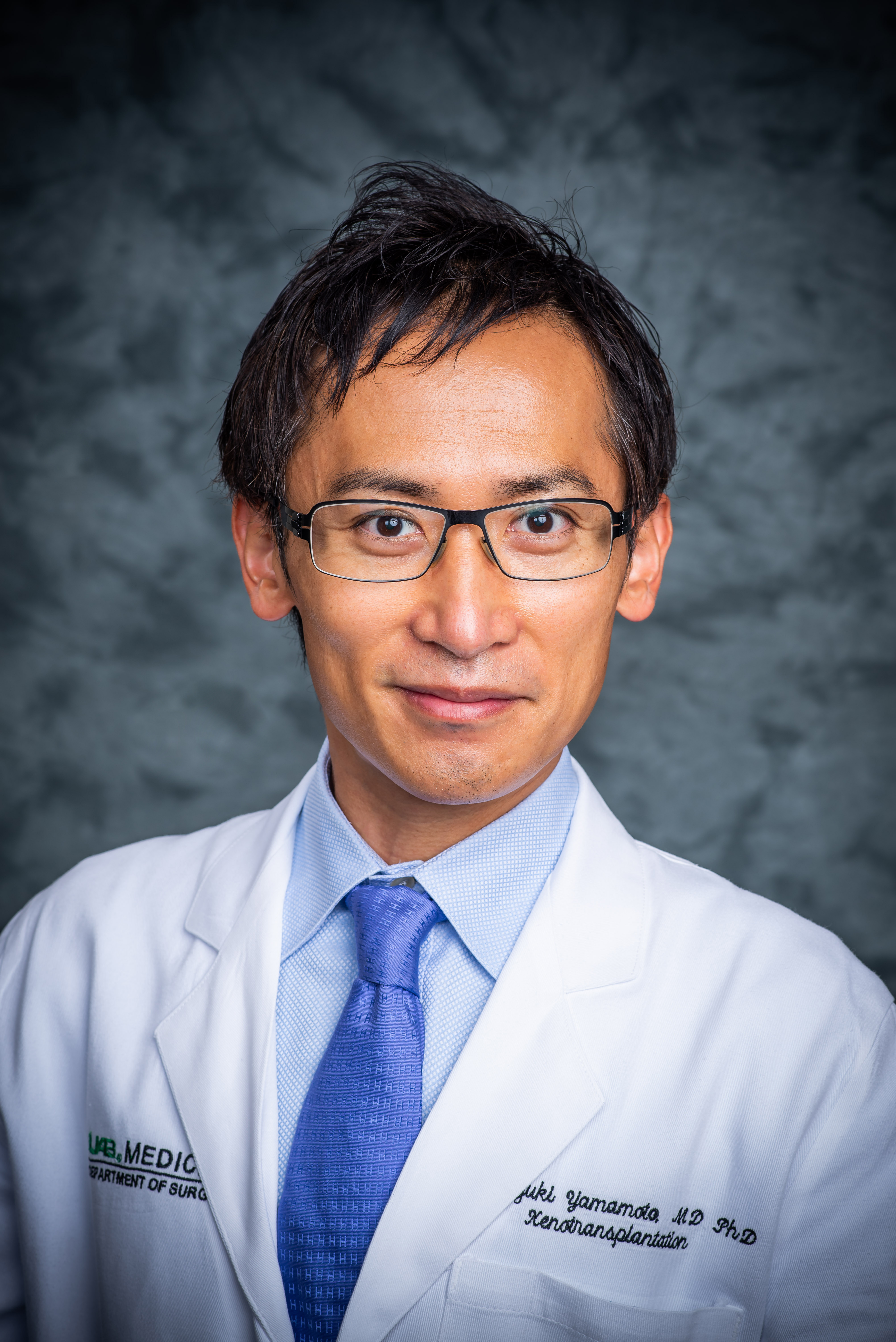 Dr. Yamamoto graduated from Tokyo Institute of Technology in Japan, where he received his bachelor's degrees in biotechnology. After graduating, he attended Shimane Medical University School of Medicine in Japan and obtained a Physician’s License in Japan. After that, he completed his residency and fellowship in general surgery at Yokkaichi Municipal Hospital in Japan. He then became a Japanese Board Certified Surgeon and Japanese Board Certified Surgeon in Gastroenterology. Then, he focused on kidney and pancreas transplantation and endocrine surgery at Nagoya Daini Red Cross Hospital in Japan. While there, he spent three years at Nagoya University Graduate School of Medicine researching biomarkers for diagnosis of subclinical antibody-mediated rejection, as well as several clinical studies, and earning his Ph.D. He then joined the laboratory of Dr. David K.C. Cooper at UAB in 2017, working in the field of xenotransplantation.

Background: TKO pigs are an optimal source of organs for transplantation into human recipients, who do not commonly have high levels of preformed antibodies against TKO pig cells. However, Old World monkeys (OWMs), e.g., baboons, do have antibodies directed to TKO pig cells, associated with significant serum cytotoxicity. New World monkeys (NWMs), e.g., capuchins, have low or no antibodies to TKO pig cells.
Our aims were (i) to measure anti-pig IgM/IgG binding and (ii) complement-dependent cytotoxicity (CDC) to GTKO and TKO pig cells using sera from humans, baboons, and capuchins, and (iii) to measure the efficacy of anti-thymocyte globulin (ATG) and Rituximab in these three species.
Methods: (i) Sera from humans (n=9), baboons (n=6), and capuchins (n=9) were tested by flow cytometry for binding of IgM and IgG to peripheral blood mononuclear cells (PBMCs) from GTKO and TKO pigs. Binding intensity was presented as relative geometric mean (rGM). (ii) The sera (final concentration 25%) were also tested for CDC to the same pig cells by flow cytometry. (iii) The effect of ATG and Rituximab on human (n=2), baboon (n=2), and capuchin (n=3) PBMCs or B cells deletion was measured by flow cytometry.
Results: Binding of serum IgM/IgG to pig cells (Figure1)
Mean serum anti-GTKO IgM and IgG binding were both significantly lower in baboons than in humans and capuchins (p<0.01). Mean baboon anti-TKO IgM binding was significantly higher than in humans and capuchins (p<0.01). Mean capuchin anti-TKO IgG was significantly lower than in humans and baboons (p<0.01).
Serum CDC to pig cells (Figure1)
Mean serum CDC of GTKO PBMCs did not differ between the three species. Baboon serum CDC of TKO PBMCs was significantly greater than in humans and capuchins (p<0.01), but there was no difference between humans and capuchins.
The CDC of ATG and Rituximab on PBMCs and B cells (Figure2)
ATG (25-50µg/ml) depleted fewer PBMCs in capuchins and baboons than in humans, but the depletion in capuchins was not significantly different from that in baboons, except at high concentration (100µg/ml). In contrast, the effect of Rituximab in depleting B cells in capuchins was very limited, and significantly less than in humans and baboons (p<0.05 or 0.01).
Conclusions: When TKO pig organs are transplanted, OWMs, e.g., baboons, would be less than ideal as recipients as they do not mimic the human immune response. NWMs, e.g., capuchins, are to be preferred. However, their small size and the reduced effect of ATG, and, particularly, Rituximab, limit their use as recipients of organs, though they would be ideal for studies of TKO pig red blood cell transfusion or skin transplantation, where immunosuppressive therapy is not required. 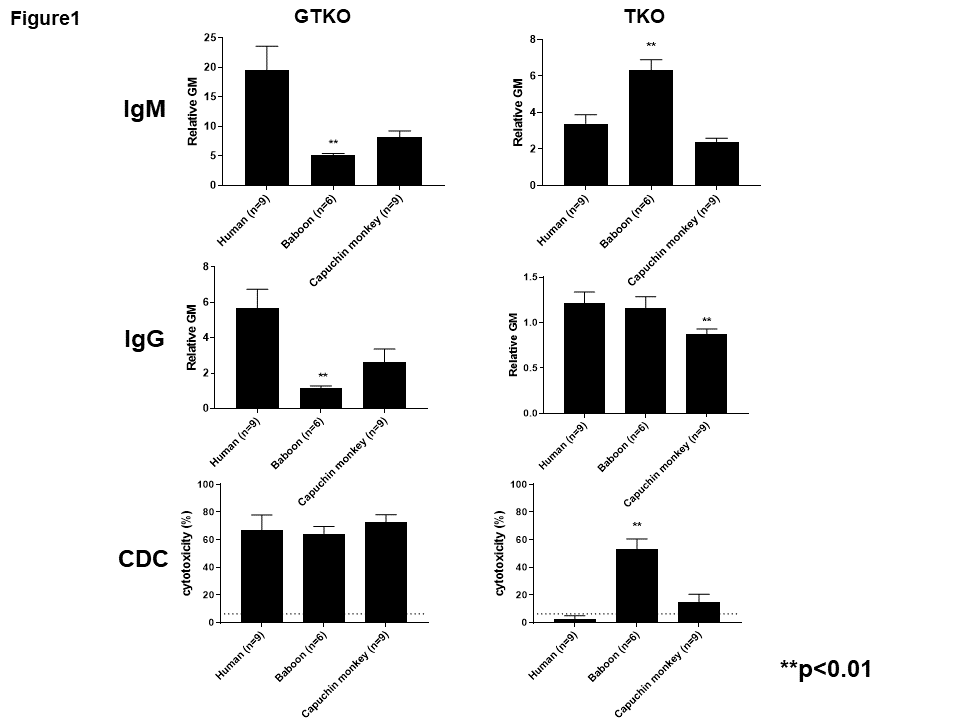 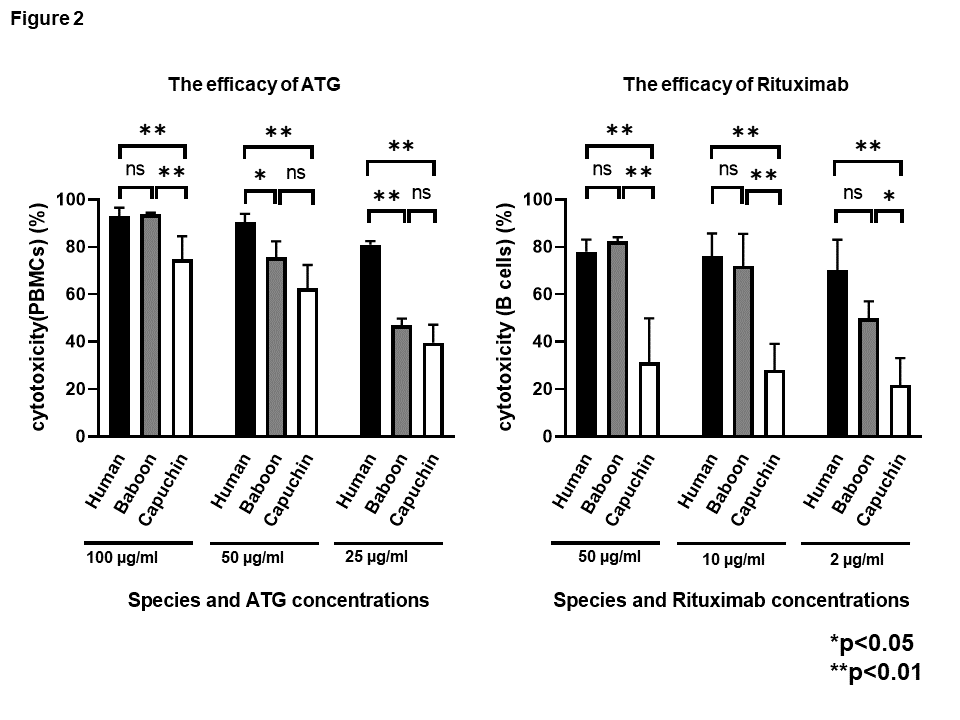 Work on xenotransplantation at the University of Alabama at Birmingham is supported in part by NIH NIAID U19 grant AI090959 and in part by a grant to UAB from United Therapeutics .