Sex and Gender in Transplantation

P-15.04 Is altruistic (non-directed) living kidney donation a realm of Caucasian females? Experience from a single center in the United States

Is altruistic (non-directed) living kidney donation a realm of Caucasian females? Experience from a single center in the United States

Introduction: Six classes of organ donors have been identified: genetically related donors, emotionally related donors, altruistic donors (directed), altruistic donors (non-directed), vendors, and organ exchangers (1). From 1987 to 2015, there has been a progressive decline in the number of living biologically related (93% to 50%) and male (45% to 38%) kidney donors in the United States (2). Non-directed kidney donors are a rare group of individuals providing the gift of life to ESRD patients. We aimed to evaluate the profiles of altruistic (non-directed) kidney donors at our center.
Materials and Methods: A retrospective analysis of all living donor nephrectomies done from 01/2016 to 10/2019 was performed.  Non-directed altruistic donor profiles were compared to all other donors using chi squared test and standard t-test for unequal variances. A p-value <0.05 was considered significant.
Results and discussion: A total of 112 robotic donor nephrectomies were performed (13 non-directed and 99 others).  The two groups were comparable in terms of age, marital and employment status. 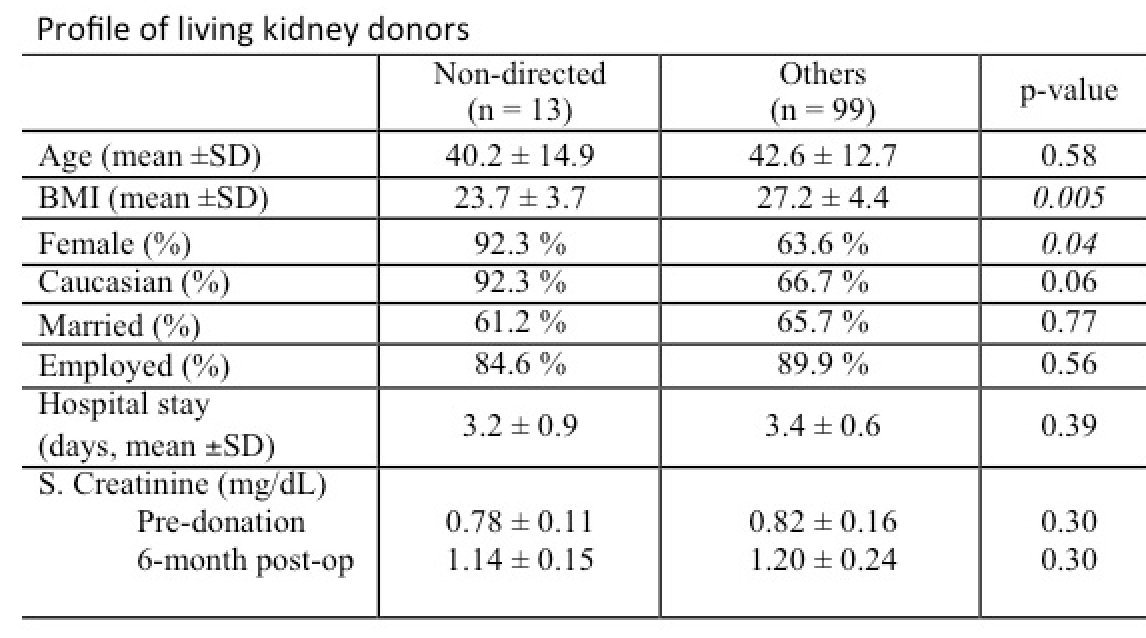 Altruistic donors were predominantly female (92.3% vs 63.6%, p 0.04) and Caucasian (92.3% vs 66.7%, p 0.06).  The non-directed donors were significantly thinner than other donors (23.7 ± 3.7 vs 27.2 ± 4.4). There was no significant difference in length of stay or post-donation serum creatinine between the two groups. Common reasons for altruistic non-directed donation (9/13) included: history of family member on dialysis (3), knowing someone who had previously donated a kidney (4) or learning of a needy recipient through social media (2). Two out of 13 non-directed donors were re-admitted for pulmonary embolus and tachycardia.
Conclusions: Altruistic non-directed living kidney donors at our center were almost exclusively thin, Caucasian females who were highly motivated. A majority (two-thirds) of other living kidney donors were also Caucasian females who were employed  at the time of donation. We conclude that educational strategies to promote altruistic living organ donation in our region need to be focussed on Caucasian males and the minority populations.