Introduction: Right-sided living donor nephrectomy (LDN) is perceived to be difficult due to anatomical factors. Robotic LDN has been reported to be associated with higher risk of complications (1). A technically challenging robotic nephrectomy could impact recipient allograft outcomes. We aimed to study the outcomes of right and left renal allografts that were procured robotically and transplanted using the conventional open technique.
Methods: We retrospectively analyzed all fully robotic (non-hand assisted) LDN and their corresponding kidney recipients (open technique, extra-peritoneal approach) performed at our center between January 2016 and June 2019. Robotically implanted kidney recipients and their corresponding donors (n =25) were excluded. The outcomes were compared using two-sample t-test assuming unequal variances and chi-square test of independence. A p-value < 0.05 was considered significant.
Results and discussion: 97 fully robotic LDN (right 28; left 69) were performed for 97 kidney recipients. A majority of donors in both the groups were young, Caucasian females. A slightly higher proportion that donated the right kidney had hypertension (18% vs. 6%, p 0.06). There was no statistically significant difference in operative times, blood loss, hospital stay or the 6-month serum creatinine between the two groups. Intra-operative complications on the right included one patient with a gall-bladder perforation (repaired primarily) and one lumbar vein bleed (clipped). One patient had rhabdomyolysis after a left LDN. There were no conversions to open surgery and no donor deaths. 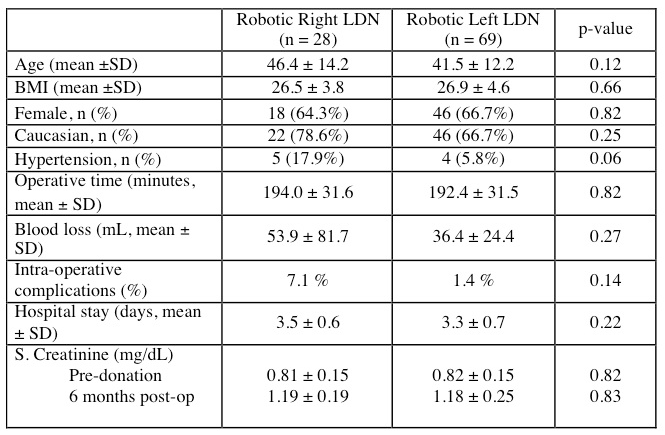 For the renal transplant recipients, there was no significant difference between in age, sex, BMI, duration of dialysis, prior transplants, anti-coagulant use or medical co-morbidities. The mean blood loss and hospital stay were comparable between the two groups. There were a higher proportion of right kidney recipients who had: females donating to males (39 vs. 23%), multiple renal veins (21% vs. 1.4%, p 0.01) and had donors with history of hypertension (18% vs. 6%). The delayed graft function rates (DGF, 10.7 % vs. 7.2 %) and the serum creatinine levels at 1-year (1.37 ± 0.4 vs. 1.25 ± 0.2, p=0.06) were not statistically different between the two groups. 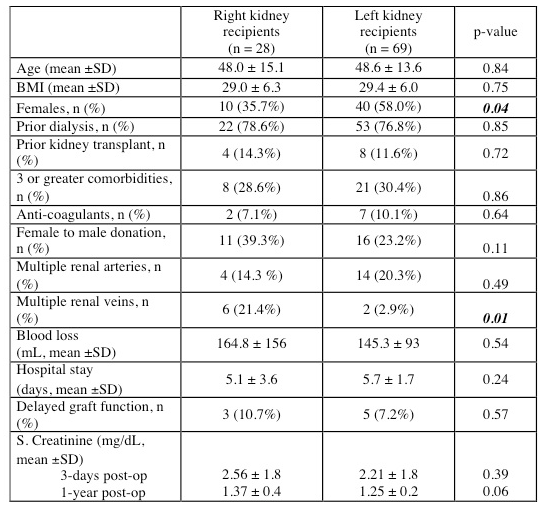 There was no significant difference in the one-year patient or graft survival between the recipients of right or left allografts. The incidence of medical and surgical complications after transplantation were also comparable in both the groups.

Conclusions: Our initial experience indicates that fully robotic right live donor nephrectomies can be safely performed with excellent donor outcomes. The recipients of the robotically procured right kidneys had excellent function compared to those of left donor kidneys. We intend to study the outcomes of robotically procured kidneys that were transplanted using the minimally invasive robotic technique.